One year ago today, my hero Jack Layton lost his battle with cancer and left his New Democratic Party of Canada, recently elected to the Official Opposition, without a leader. He left Canadians from coast-to-coast without a mustached knight in orange armor to champion their values in Parliament. He also left us with a remarkable sense of optimism and purpose, and his now familiar parting words to Canadians: 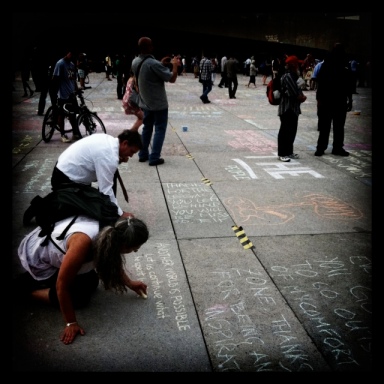 Layton’s message of hope and optimism has been printed on posters and in papers, chalked onto sidewalks, and blogged and tweeted throughout cyberspace. These are the words of a dying man passing the torch to the people he spent his life working and fighting to represent. And these are words to live by.

On this day last year, I wrote a blog post entitled,
“…And we’ll change the world. (My tribute to my hero)“. My heart was broken and I keenly felt the loss of the person who had shown Canadians a different and better way to engage with Canadian politics and each other. Was Layton a dreamer? Probably. It’s easier to wax optimistic when you realize that your fight is almost over. But I’m a dreamer too. Based on last May’s federal election results, a large percentage of Canadians are dreamers. And Jack taught us that being a dreamer is fine, as long as you can also be a fighter, a hard worker, and a good person.

And you need to have patience. When Layton told Canadians that we would change the world, he didn’t mean tomorrow. He didn’t mean in one year from that day. Jack Layton’s story is not one of resting on success–in his 8 years as leader of the federal NDP, he never was our Prime Minister, and he did not unseat the Conservative government. What he left us with is a legacy of perseverance, in which the process is just as important as the product.

Layton did not become a respected and beloved public figure overnight. Prior to becoming the leader of the NDP, he spent almost 20 years in municipal politics in Toronto. Growing the NDP and its voter base over the 8 years Layton was at the helm required intelligence, commitment, and hard work, coupled with a public persona which by turns needed to be both affable and firm, witty and civil. It took Layton and his party time to get this right, and it took Canadians time to realize that the NDP could be a viable alternative to the governments we’re used to.

“The house that Jack built” isn’t finished, and it isn’t one that Layton built himself. In his political life, Layton and the NDP benefited from caucus members, individual MPs, staffers, and countless volunteers, donors, and voters. In his personal life, Jack Layton found love and support in his partner, MP Olivia Chow, and in his family.

Is it daunting to be passed the torch by a man whose life and death in Canadian politics has raised him to almost mythical status? Absolutely. Sacrifices will always need to be made by anyone who wants to fight for a cause. But a struggle towards a better Canada need not be alone, and it need not be miserable. Engaged people all over the country are becoming invested in Canada’s future, even through something as simple as voting or signing a petition. Personal sacrifices will be required from anyone who wants to actually work in politics, but the work doesn’t need to be devoid of love, humour, or joy. In fact, if Layton hadn’t looked like he was having so much fun on the campaign trail, I doubt he would have reached so many people.

One year after Layton’s death, I am still afraid of the power of Harper’s Conservatives. I’m afraid of pipelines and oil tankers in BC. I’m afraid of the impact an anti-expert, anti-science, and anti-research culture in Ottawa is having on policy decisions. I’m afraid of the US’s “war on women”, because any supposedly “first world” country that doesn’t respect women or their bodies spells bad news for us all. Jack Layton is gone and he can’t fight my fears for me.

But as Layton himself wrote, “[our] cause is much bigger than any one leader.” My fears make me hopeful because of the people all over the country who are rising up to combat them. Canada will never be some hippie socialist utopia where nothing bad ever happens. But if we engage in a process of work, intelligence, and above all, compassion, we will get so much farther, and become so much better, than the mediocrity and inequality we labour under now.

So where’s the product of Jack Layton’s life? I don’t know. It may never have arrived. But I have seen the process of Layton’s political life in the NDP, the work over years to achieve the ground the party now stands on. If Layton’s life, cut short in the middle of such an exciting time, is any example, it may well be that the process is really all we have.

[To see how other Canadians are remembering Jack Layton, you may want to check out DearJack.ca.]