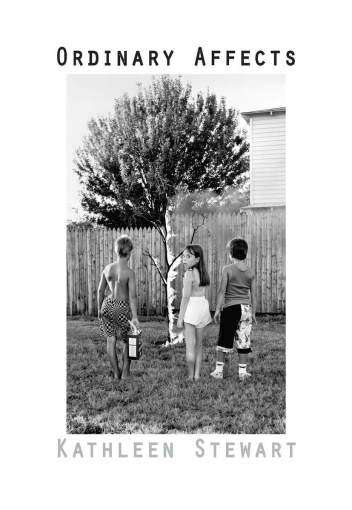 Written by anthropologist Kathleen Stewart and published by Duke University Press, Ordinary Affects may seem, at first glance, unremarkable and perhaps even pretentious, just another academic text published by an academic press. But Ordinary Affects, a collection of more than 100 vignettes and observations of “ordinary” American life, quietly unpacks the everyday occurrences and relations that constitute this “ordinary” in ways that are unsettling and profound. If Ordinary Affects were a work of fiction I would greatly admire it. That it is not fiction makes me obsessed with it.

Though Stewart (who refers to herself as “she” and “her” in the text rather than “I” or “me”) is present in many of the vignettes, one does not get the sense that she sees herself as a stand-in for the Everyman (or “Everywoman”) of contemporary American life. She is a woman, she is white, and she is an anthropologist. Her observations are necessarily filtered through these lenses, however, the majority of the stories collected in this work are not really about her, per se–some are about people she knows or has spoken to–an ice fisherman  or a Vietnam vet or a homeless person whose friend was struck by a train, some concern stories she has seen in the news, handwritten signs, towns she has visited, experiences remembered and relayed to her by friends and family. There are deaths, violent crimes, injustices, accidents, yard sales and traffic jams, domestic disputes and grocery stores, acts of protest and (American) dreams. Within small fragments of text bearing headings like “Dryer Sheets”,  “The TV Repairman”, and “Suburban Apocalypticism”, Stewart gently and relentlessly pursues the ordinary, revealing it as trembling with potential, multi-faceted, twining and entwined. One senses there is more there, blurry and difficult to pin down.

“The ordinary” Stewart writes, “is a moving target. Not first something to make sense of, but a sense of sensations that incite. The possibility that something will snap into sense or drift by untapped” (93). Many of Stewart’s vignettes involve those moments where that something does indeed “snap into sense”, if only for a moment, a flash of recognition, of a happening, that soon dissolves back into the shuffling and shifting landscape of everyday life. In a segment called “Pipe Dreams” (98), a group of striking miners waiting in a West Virginia health clinic have realized that their strike has failed. One of them begins to fantasize about looting the governor’s mansion–“Power grows palpable in the image of high brick walls that can be breached by a potent, collective, working-class masculinity.” A something fills the room, then is gone.

As a student in an anthropology class, Ordinary Affects (written in a lyrical prose reminiscent of the way French poet Francis Ponge wrote about objects), is a refreshing addition to the more dry theoretical texts that often dominate the curriculum. As a writer, this book is an absolute gift.