It is my intention (despite my two-week hiatus to write about other things) to document each day of our trip to the Galapagos on this blog. Why? Because a travel opportunity like this comes but once in a lifetime and I feel this incredible experience requires thorough processing on my part. Besides, it means I get to share more cute photos of sea lions. SEA LIONS!

Though I will agree that the Galapagos archipelago is indeed a paradise, it is far from lush, at least not everywhere. The most striking feature of Isla Floreana is its emptiness. Even the sky seemed blank and grey on this Wednesday morning. The island was quiet too. A sea lion or two slept on the sand and a few sally lightfoot crabs skittered on the rocks but otherwise we had to learn about Floreana’s other fauna through landmarks and traces: this is the lagoon where flamingos search for shrimp. These are the tracks left by a sea turtle on her way to her nest.

The cracked earth, forbidding rocks, and mist-shrouded highlands provided a perfect backdrop for our guide Jose to tell us the story of “la Baronesa” and the other German settlers who took up residence on Floreana in the 1930s:

La Baronesa (a German baroness) caused a stir when she arrived on the island with her three lovers. Life on the barren Floreana was far from decadent and according to Jose, la Baronesa used her feminine wiles to obtain food and other necessary goods from among the male settler population (and not just among her own lovers). One man who was taken in was a Mr. Wittmer, who farmed in the highlands with his wife Margaret. La Baronesa seduced Wittmer and Margaret threw him out. Wittmer camped by the gates of his compound and begged Margaret to let him back in–this wasn’t necessarily his heart talking, but more than likely his stomach (now that he was cut off from his farm). Hungry and desperate, Wittmer ate the food he found near the compound fence, food which Margaret had poisoned for the rats. Wittmer died.

And la Baronesa? According to my Lonely Planet, she and one of her lovers simply disappeared. Another lover died in a boating accident. A certain Dr. Rittmer (an eccentric vegetarian who’d had all his teeth removed before sailing for the Galapagos because he wanted to avoid dental problems) mysteriously died from food poisoning after eating chicken (suspicious, don’t you think?). One by one, the settlers died or disappeared under strange circumstances, until only Margaret and her children remained. Her descendents now operate the Hostal Wittmer on Floreana, and though Margaret wrote a book about her experiences, much of what happened to those early settlers remains unexplained.

The lagoon by which we heard the tale of “La Baronesa” 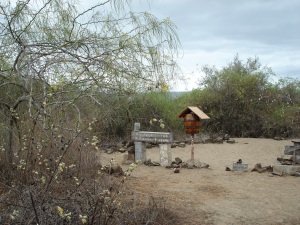 Tales of mystery and seduction aside, our visit to Floreana was marked by two more highlights. The first was a visit to Post Office Bay. Post Office Bay is so-called because it boasts a small barrel with a little roof and a little door, mounted on a post. This little “post office” operates through the kindness of travelers. When you bring an addressed postcard to leave in the post box, it is expected that you will go through the postcards already there. If you live in or near the city the card is addressed to, it is considered polite for you to deliver it yourself (TC and I couldn’t find any for BC but took a couple for Eugene, Oregon….I hear it’s nice down there). We addressed a card to ourselves and promptly forgot all about it, thinking we’d likely never see it again. The other week, a nice gentleman from White Rock knocked on the door and handed TC our post card, safe and sound from Isla Floreana. What a system! 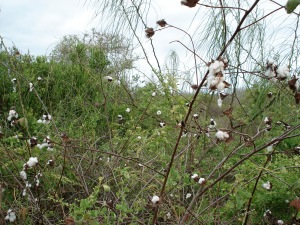 The lack of flamingos during our morning hike was made up for by our afternoon dinghy ride. At this point TC and I had gone on a lot of dinghy rides and that was no big whoop in itself, but when our boat stopped beside a little rocky islet off Floreana’s coast we saw two Galapagos penguins. I don’t think I ever thought I would see penguins in the wild. Galapagos penguins are tiny and adorable and when they swim they look like ducks. They are also the most northerly penguins in the world and the only species of penguins that lives in the tropics. 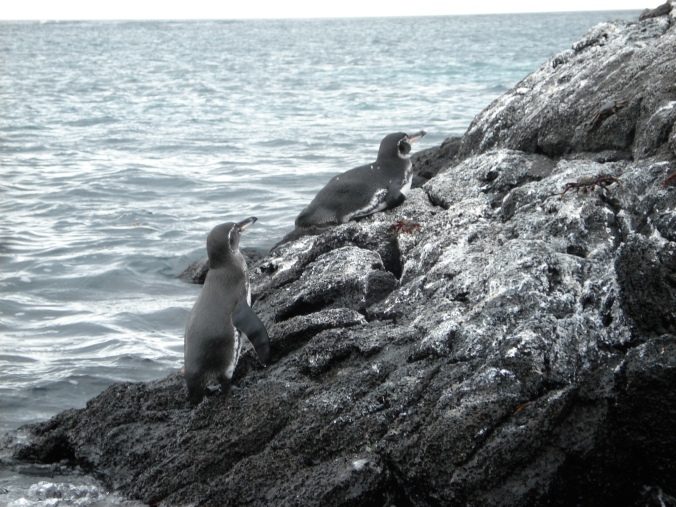 I was beginning to think there was nothing the Galapagos couldn’t show me.