You see, on Friday I had minor dental surgery. Over the next few days, as the swelling in my right cheek went down, I noticed bruising begin to darken under my eye and on my cheek. I’m not really sure how I managed to get a black eye from a gum graft (maybe my dentist was resting his hand on my cheekbone just under my eye and I didn’t notice because my face was frozen?), but at any rate, I looked a little rough.

Of course, that didn’t stop me from getting back into the swing of things after my dentist-mandated two days of rest: going Christmas shopping with TC, attending a Christmas party, going to work. If I noticed people noticing the bruises on my face I’d explain that I’d just had dental surgery and we’d all laugh.

We’d laugh because the idea of me being in a fist fight with someone, or the idea of my loving and even-tempered husband ever behaving violently towards me, is laughable. That kind of violence is totally alien to me and is so far outside the sphere of my life right now that the idea of anyone ever intentionally giving me a bruised cheek and a black eye is actually funny.

Except…it’s not. As I walked around in the mall on Monday, or sat with my husband in the food court, or caught questioning eyes on my face at work, I realized that the idea of a woman you know being punched in the face by her partner is not so preposterous. It’s very likely that many people who saw my bruises this week thought this is what had happened (as I signed for a package yesterday the DHL delivery man even said carefully, “I have to ask you what happened to your eye” and was very relieved when I told him about my dental work). It’s the same conclusion I would likely jump to if I saw a woman with bruises on her face–it’s almost cliche, the face of the battered woman. Because it happens far too often.

What do you tell a woman who has two black eyes?

Nothing. She’s already been told twice.

I can’t remember who first told me that “joke”, or how old I was the first time I heard it. I do know I’ve heard it more than once. I’ve also heard more than one girlfriend jokingly proclaim “I fell down the stairs!” when asked about a bruise, which was only a “joke” because most of us knew that the phrase “I fell down the stairs” (or “I walked into a door”) was a code–one of a variety of common lies used by women to cover for an abusive partner. This is a “joke” I’ve made with friends too. Why was it funny? Was it funny because we felt safe from violence? Or was it funny because we aren’t, and laughter covers up our feelings of powerlessness? 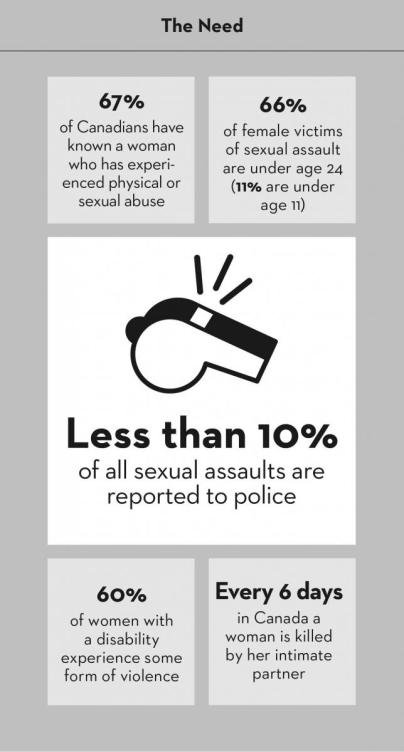 I have never been struck by a partner and I have never been afraid that any romantic partner would physically harm me. I don’t want to say this makes me lucky, because lucky is when you find a $5 bill on the ground, not when you are treated at the base level of how every human being should be treated. And yet, to say that women who experience violence at the hands of someone they love are not unlucky seems to suggest that there is some way they can, or could have, controlled the actions of their partner (or made better choices). And that’s not fair, and it’s not true.

After the third or fourth mention of my black eye, I tried to imagine for a moment what it would be like if TC actually HAD punched me in the face. It’s not a thought-exercise I care to repeat, and it made me feel sick; I really can’t picture the man I love doing such a horrible thing. But then I realized–not many of us can. Most of us don’t fall in love expecting to be physically assaulted by our partner. The idea is so at odds with the idea of the person we love, if it happened, we almost wouldn’t believe it, would we? If you think of someone you really REALLY love, someone sweet and gentle, hurting you–you’d literally think they weren’t themselves in that moment, you’d think some kind of extreme provocation must have occurred to push them to do what they did. It wasn’t them, you’d tell yourself, it was stress/anxiety/alcohol/mental health issues, etc. And then you’d start thinking, “If I don’t nag them/argue with them/make them jealous, they won’t do it again,” which unfortunately is simply never true.

Like many people, I’ve asked myself “Why can’t women who are being abused just LEAVE?”, as if leaving were so simple and so easy and so safe. I could try to list some of the commonly-cited reasons women stay with an abusive partner, but instead I will defer to the Canadian Women’s Foundation (to see their statistical sources please visit their Facts About Violence page):

IF A WOMAN IS BEING ABUSED, WHY DOESN’T SHE JUST LEAVE THE RELATIONSHIP?

Whether or not a Canadian woman will be a victim of intimate-partner violence almost seems like a crap shoot–either you wind up dating a guy who hurts you, or you don’t. And while abuse doesn’t discriminate, your odds of being that woman who ends up with an abuser are increased if you are First Nations, or a woman of colour, or a woman living in poverty, or a woman with a disability, or a trans* woman–basically, your vulnerability to domestic violence is increased or decreased by factors that have nothing to do with how strong you are or how virtuous you are or how smart you are or whether or not you’re a “good” wife/girlfriend. Various factors can affect your likelihood of experiencing intimate-partner violence, but none of these factors are your fault, and none of these factors make any woman deserving of violent treatment.

And yet….and yet. There are still far too many abused woman in this country, and far too few ways to protect them. Generally speaking, the onus is on women to take the first step to protect themselves and their children (very difficult to do if you are being made powerless and afraid). Nevertheless, the Government of Canada has some information about resources for those experiencing domestic violence, and if your partner is hurting you or making you feel afraid (even if you have not been hurt physically), or you suspect a friend or loved one is being abused, please click the link above.

Note: For your safety, if you are being abused or are afraid your partner will harm you, it is advised that you do NOT access domestic abuse resources on a computer or electronic device your abuser has access to–instead use a computer at work or the Library, a trusted friend’s smartphone, etc.

Second Note: Though the majority of victims of domestic abuse are women and I have focused on female victims of intimate-partner violence in this post, I recognize that all genders can be victims of abuse, and all genders can be perpetrators. I believe the following excerpt from the Options for LGBTQTS Women webpage on the Battered Women’s Support Services website (a Vancouver-based organization), explains this reality thoroughly:

Abuse occurs within lesbian, gay, bi-sexual, queer, trans and straight relationships. It happens in all communities regardless of race, social status or education. Size, strength, mental health, use of substances, gender presentation or politics does not determine whether she or he has been abused or is abusive.

Last Note: A quick Google search can help you find information on women’s shelters and other resources in your area, or can help you find ways to help support vulnerable women in your community. And please, if someone tells you they have been abused, believe them.