Ithaka presented by dream of passion productions and Excavation Theatre at the Havana Theatre (1212 Commercial Dr.) now until May 14. 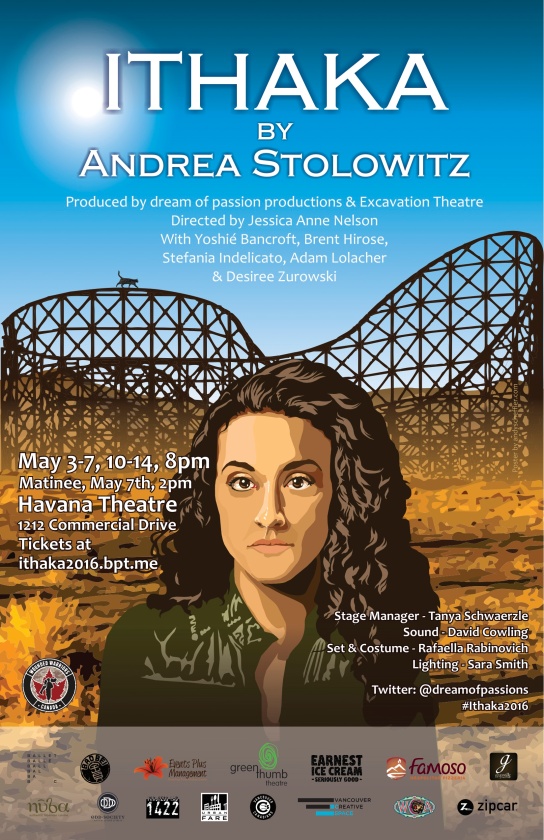 When we, as a society, ask soldiers and other military personnel to deploy into a war zone, we are asking them to face the dangers and near impossibility of an extreme environment. If they survive their deployment, they are asked to do something equally, if not more, impossible: to return to their previous lives as if nothing unusual has happened.

The struggle of veterans to find “home”, even after the fighting is over, forms the core of Ithaka, written by American playwright Andrea Stolowitz and directed in its Canadian premiere by Jessica Anne Nelson (artistic director of Excavation Theatre). Stefania Indelicato (artistic director of dream of passion productions) stars as U.S. Marine Elaine “Lanie” Edwards, recently returned from a tour in Afghanistan, who finds she has brought the terror, guilt, and alienation of the battlefield home with her.

Seated in an alley configuration in the Havana Theatre, audience members are physically confronted by the emotional weight of the play’s subject matter with an immediacy that is as overwhelming as it is moving. However, the symbolic/surrealist set of Rafaella Rabinovich (a small wheeled platform resting on a line of railway track) fills the tight playing space, creating an inconvenient obstacle for the actors, who are for the most part delivering realist performances. This physical difficulty can be read symbolically, I suppose, but if that is the intention I found myself wanting more out of the staging and the transitions between scenes, many of which are handled purely logistically rather than used as opportunities to explore the Odyssean metaphors present in the set and script, or to utilize the supporting cast members whose dialogue otherwise may not require their presence onstage. As for the performances themselves, the intensity dial is consistently turned right up to 10, giving us the full force of the script where the scenes call for it, but also, for me, overruling some of those quieter moments that could have played well in such an intimate venue.

But make no mistake: as a performer, Indelicato is an absolute powerhouse, fully capable of carrying this play through any challenges it may have. Her unflinching portrayal of a veteran grappling with PTSD and the inane normalcy of civilian life dares you to remain unaffected. Both the production and the performers show their strengths in the script’s dialogues, in which relationships are created, remembered, and blown up (a favourite scene of mine is a particularly heated exchange between Lanie and her civilian husband Bill, played by Adam Lolacher). One senses that the actors are truly listening to each other, even if their characters (sometimes) are not.

As the audience began to applaud the conclusion of the play, the lights came up to reveal several people wiping their eyes, and I overheard a woman in the bathroom tell another woman in line that she thought the show was “amazing”. At the end of the day, it is the stories we tell and hear that move us, and that remain with us long after we’ve left the theatre. The story of Ithaka is important, compelling, and passionately told.

Ithaka runs until May 14 at the Havana Theatre on Commercial Drive. Tickets can be purchased online through Brown Paper Tickets.

Wounded Warriors Canada is listed as a community partner of the production. From their mission statement:

Through a wide range of national programs and services, Wounded Warriors provides a spectrum of care that is focused on mental health and, particularly, Post-Traumatic Stress Disorder.

If you would like to find out more about their work or make a donation, please visit woundedwarriors.ca.