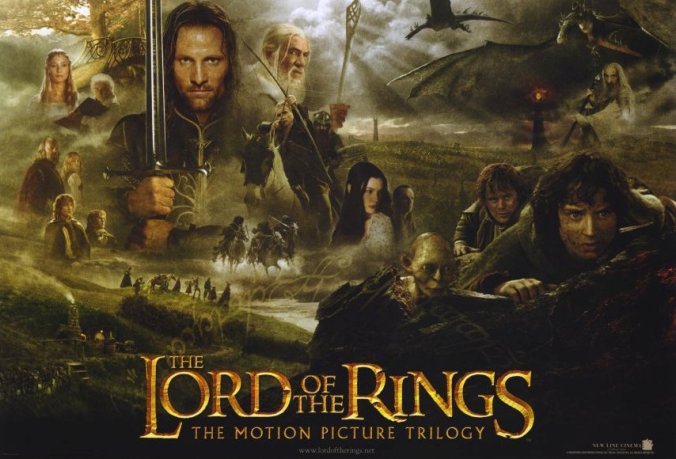 This post is late in coming, and the reason for this is that I have spent the majority of the past week watching the film series of J.R.R. Tolkien’s The Lord of the Rings (and related material) instead of doing anything else.

It went something like this: TC and I watched The Hobbit: An Unexpected Journey on DVR before I went home to Saskatchewan for the holidays (actually, we watched it once when I was really hungover, and then I wanted to watch it again when I didn’t have a headache, so we did, and then I wanted to watch the dwarves singing again, so we did, and then we just kept it playing on a loop while we cleaned our apartment, so we basically watched The Hobbit: An Unexpected Journey for about a week, on and off). When I got home for the holidays, my little sister mentioned she had just seen The Hobbit: The Desolation of Smaug in theatres. This in turn inspired her to decide to watch the entire Lord of the Rings film trilogy (the regular-length one, that we had bought for my dad years ago) over the rest of our holiday, and I was only too happy to join her.

My sister popped The Fellowship of the Ring into the VCR (yes, that one was on VHS) last Thursday and I watched half of it before I managed to peel myself away to go “ice fishing” with my friends (“ice fishing”, as it applied to us, meant bundling up and sitting in lawn chairs on the ice and just shooting the shit while other people fished; alcohol was also involved). When I got home to my parents’ place that evening my sister and my dad and I watched The Two Towers and then The Return of the King two days later (which I only half-watched because I was also playing a game of Settlers of Catan at the same time).

When I got back to Vancouver on Sunday night TC was jealous of all of my LOTR watching and then he wanted to watch the trilogy but I said no, because I’m busy (and I actually am, I swear). When our New Year’s Eve plans fell through on Tuesday we booked seats at the Scotiabank Theatre to see The Hobbit: The Desolation of Smaug in 3D UltraAVX with Dolby Atmos surround sound and popcorn and Skittles.

And then when we got home that night TC put on his extended version of The Fellowship of the Ring (2 DVDs! No wonder I fell asleep!) and we rang in the New Year somewhere around the time that Bilbo was thanking people for coming to his birthday party.

And we have been watching the extended version’s extensive bonus features ever since. And they’re great.

We’ve also been looking up the lore on Wikipedia because I had a few questions the movies weren’t answering for me, including:

The funny thing is, if you asked me to make a list of things I love, or even things I really really like (the kind of things I could imagine myself devoting a week’s worth of free time to), I would never dream of putting The Lord of the Rings on that list. I’ve never even read the books (I tried, in my youth, but Tom Bombadil sang his song for PAGES and that was enough for me). I’ve read The Hobbit and from what I recall I liked it. It was a fairly straightforward tale of adventure (which means it definitely didn’t need three whole films devoted to it, greedy money-grubbing Hollywood execs and rabid Tolkien devotees notwithstanding) but I didn’t like it as much as other childhood stories. I honestly never thought I was that into Tolkien having read more fanciful pieces like Roverandom as well and thinking, “M’h”.

But there’s something different about the world of LOTR that makes it so much more than a work of fantasy. The history of Middle Earth (and surrounding vicinity) is so detailed and so complex, with languages having different dialects as well as changing with time the way real languages do, so much so that even characters like Sauron, who in the entire LOTR is called no other proper name but Sauron, as far as I can gather, has had five or six other names in the history of “creation” in this universe. The epic LOTR, with The Hobbit included, is just a tiny fraction of the history of Tolkien’s world, just as the entire 20th century is just a tiny fraction of the history of our own. It boggles the mind. It makes me feel like Tolkien didn’t invent this lore, he recorded it. As if Middle Earth already existed somewhere and Tolkien’s the scholar and explorer who discovered it and as he explored more of the kingdoms and became more familiar with its legends he recorded them and passed them on to us. In order to create what he did, Tolkien was clearly a genius, and was clearly involved in this world of his own making. Which is probably why it’s so involving.

And then Peter Jackson made some movies, and the elf cities are so beautiful, and Merry and Pippin and the adorable Gollum/Smeagol are my favourite characters (I don’t even like Frodo, what a drag). And the music is so dramatic, and the battles are so exciting, and the rest is history. The History of Lauren, in her Pajamas, Watching Her TV, that is. An epic tale of addiction and occasional self-loathing. Or maybe the power of the One Ring has got me too, and I’m just consumed by it, and in a hundred years I’ll be grey-skinned and big-eyed and singing adorable songs about eating raw fish, “so juicy sweeeet!”

Which would maybe be worth it?