I am writing to you today to humbly request that you consider making me your sidekick on the Rick Mercer Report. I know what you are thinking. You are thinking, “The RMR is an excellent show just as it is, without a sidekick.” And it is. It certainly is. But my dream job is to be your sidekick on the Rick Mercer Report, and I’m pretty sure my effect on the RMR will be harmless at worst, and at best, I might improve ratings in the “enjoys watching well-mannered young Canadians on TV” demographic. (And who doesn’t like well-mannered young Canadians? It’s what we DO.)

I will now outline the reasons why I would make an excellent sidekick for you on the Rick Mercer Report:

1. FANDOM. I think anyone who is going to be your sidekick should be a fan. I am a fan. Of you Mr. Mercer, of the Rick Mercer Report, and of the CBC. Being from rural Saskatchewan, I was raised on CBC TV (one of two channels we received) and CBC Radio. I grew up watching This Hour Has 22 Minutes. Sure, once I moved out to the West Coast and mysteriously got free cable for a while I left my CBC roots. But after the Rick Mercer Report visited Simon Fraser University (my alma mater) for the Spread the Net Student Challenge I started watching the RMR. A wave of nostalgia washed over me and my highest show-biz ambition is now to be a CBC media personality.

2. TRAVELLING CANADA. A lot of what you do on the Rick Mercer Report involves travelling across Canada. As my only dependents in Vancouver at the moment are fairly hardy houseplants I am up for Canadian adventures whenever you and the CBC say the word. (I graduated with a BFA, so you know I have free time.) One of the reasons the RMR works is that you have a genuine interest in and love for Canada. So do I. I’ve lived in other countries and I relished the experience but I’ve got a pretty strong bias for Canada. Big places, small places, north, south, east, west, Canada’s my home and I’d love to show it off. I also feel that between the two of us (you growing up in the Maritimes and working in Toronto, me growing up in Saskatchewan and working in Vancouver) we’ll have Canada pretty much covered east to west. (As a matter of fact, let’s add “Western Canadians” to the demographic I can try to help reach. Cha-ching.)

“Hold the phone,” you might say, “there’s a lot more to the RMR than just travelling around Canada.” I know this, and I am ready. Heli-logging? Love to try it. Bungee jumping with Rick Hansen? Zip lining? Sign me up. Harvesting potatoes? I’ve been picking potatoes since I was a young fry. I am ready for you, Canada. I will taste your jams and dance your jigs and fire your cannons and ride in and/or drive vehicles I most certainly do not have the certification to operate. I will wear a camera on my head as I plunge off some Canadian summit, kept safe by only a harness and my will to not die on Canadian television. So Canada’s a big wild country? Bring it.

3. MY TV-FRIENDLY ATTRIBUTES. I understand that good RMR sidekick material would also have to be good TV material. I’m outgoing and love talking to people. I’m cheerful and silly, smart and grounded. I keep abreast of Canadian politics with my Maclean’s subscription (all the better to quip about politicians with), my more-clever-than-me friends, and my new Twitter addiction. I have a clear and pleasant speaking voice (like an elementary school secretary), I’m very polite, and I’m reasonably easy on the eyes too: 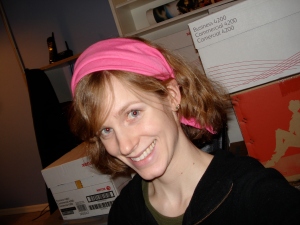 Nothing that a CBC make-up artist can't spruce up.

I realize that the RMR and CBC TV likely do not have the budget to hire a whole other (more or less unnecessary) person to be your sidekick. I would like to point out that in addition to the attributes listed above, I’m relatively small, don’t eat much, and require fairly little upkeep. I am happy to curl up each night in a bedroom set left over from “Wind At My Back” or any other remnant of CBC Canadiana not currently being used. A nice four-poster from “Road to Avonlea” would do just fine.

As a spunky Canadian and fan of your show, Mr. Mercer, I believe I really ought to be considered as a possible sidekick for you on the Rick Mercer Report. I would do an outstanding job mostly because I would be so jazzed to be there. Also, my parents would think it was really cool.

I am able to drop everything and be an awesome sidekick at your earliest convenience. References are available upon request. I wish you a very Merry Christmas and a Happy New Year. Best of luck in your 2011 season.

P.S. For all of you reading who are NOT Rick Mercer or a representative of CBC Television, remember to watch the Rick Mercer Report on CBC when it returns in the New Year and to have a wonderful Christmas.

Are you going to watch the Rick Mercer Report? I know I am!