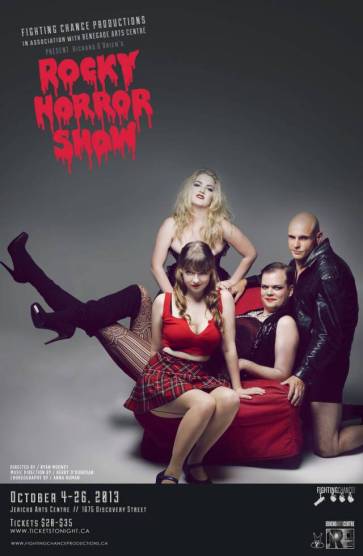 If you’re still a “Rocky Virgin”, it might be time to pop your theatrical cherry with Fighting Chance Productions‘ season opener, the cult classic Rocky Horror Show, playing at the Jericho Arts Centre until October 26 (with “11:59 Midnight” showings October 12th, 19th, and 25th).

Fans of the 1975 film The Rocky Horror Picture Show starring Tim Curry will know what to expect, but those who have never experienced the castle of Dr. Frank-N-Furter on either stage or screen are in for a bit of a shock. This show is NUTS, and it doesn’t make a lick of sense, plot-wise. That doesn’t mean it isn’t a great time. Though the film was originally considered a flop, a devoted group of fans soon made The Rocky Horror Picture Show an engaging and interactive experience through the development of “official” heckles and the use of audience props.

Fighting Chance’s Rocky Horror Show embraces (and often relies) on these traditions to make the performance the fun that it is. The cast members expect to be heckled and are not surprised when the audience showers the stage in rice or playing cards (for the safety of the performers, audience members are asked NOT to bring their own props, and to instead purchase actor-friendly prop bags available at the venue for $5 if they want to throw things during the show). Not knowing any of the traditional heckles, I felt a bit left out, but after doing some internet research it seems that part of the mystique is having to attend a showing or performance of Rocky enough times in order to catch on, and since the heckling is sort of ever-evolving, it’s hard to find a definitive source anyways (the Official Fan Site for The Rocky Horror Picture Show does NOT publish a list, though it does help clarify the Rocky phenomenon). In the spirit of good fun, I do have a few tips to get you Rocky Virgins started:

Erika Thompson and Will Hopkins play a nice young couple who don’t know what they’re getting into. Photo credit: Devin Kerringten

By and large, the performances (by both the leads and the chorus members) are pretty solid. Good singing, good dancing, lots of camp and naughtiness, but one performance truly stands out: Seth Little simply dominates as Dr. Frank-N-Furter, with a voice to match his physical prowess. Every purse of his painted lips or cock of his pencilled eyebrows is both perfectly natural and right on cue. Little speaks, moves, and sings with the ease of a seasoned drag veteran (one would think he wears a corset and heels every day of his life, and who knows, maybe he does…).  I love when a performer takes a difficult role (especially such an iconic one) and makes it seem effortless; Little is a pleasure to watch. A special nod should also go to Erika Thompson for her performance as the ingenue-turned-“slut” Janet Weiss, and Steffanie Davis for her delicious portrayal of Dr. Scott.

Few opening nights are without their technical hiccups and unfortunately during Tuesday’s performance serious microphone issues left some main characters without a mic for several musical numbers (thankfully never Dr. Frank-N-Furter), and overall, I felt the musicians needed to be turned down just a bit so as not to overpower the singing. The draped walls and cavernous ceilings of the Jericho make it a difficult singing space to begin with, so even with a talented cast doing their valiant best, a lot of lyrics were lost over the course of the night. Having worked with (and attended many productions by) smaller theatre companies, I am usually pretty forgiving of technical snafus (especially on opening), however, given that tickets to the Rocky Horror Show sell for $39.25 each ($34.25 for students/seniors), the audience really should be able to expect a fairly high level of technical mastery. I sincerely hope these technical issues are just a case of “Opening Night Murphy’s Law” and will be worked out for the remainder of the run–it would be a shame if they prevented anyone from enjoying what is an otherwise outrageously pleasurable show.

Luckily for Fighting Chance (and for the audience), if any show can handle a few technical disasters it’s the Rocky Horror Show. It’s raunchy, campy, and incredibly interactive. The characters know they’re putting on a show and they can react to technical mishaps with humour and cheek. The audience is never meant to forget that they’re watching a performance so it’s not a big deal if we can see some of the strings being pulled. Technical issues aside, the Rocky Horror Show is absolutely ridiculous and is ridiculously fun to watch.

The Rocky Horror Show runs until October 26 at the Jericho Arts Centre. Tickets can be purchased online or by telephone at 604.684.2787.

Disclosure: My tickets to the Rocky Horror Show were provided by Fighting Chance Productions. The content of the review is my own.