Summer is upon us, and with the summer comes the opportunity to explore the “supernatural” province that we live in. If you don’t have much time (or money), what better way to enjoy beautiful BC than to enjoy the natural and cultural gems existing close to home?

In which NiftyNotCool and her TC hike the Chief

One warm BC Day, on a whim (and after getting pumped up by watching the classic 80s film Labyrinth), TC and I borrowed his brother’s car and headed towards Squamish to hike the Chief. (For those who don’t know, the Chief is a granite cliff/mountain that you can hike to the top of. Pretty spectacular.)

After a short and scenic drive along the Sea-to-Sky highway, we arrived at the Shannon Falls Provincial Park so we could check out the pretty falls before beginning our hike to the summit of the Chief’s First Peak, which is technically part of the Stawamus Chief Provincial Park (beginning your journey at Shannon Falls adds negligible time and effort to the overall hike AND involves a waterfall! Score!).

After hearing I’d been up the Chief, one of my coworkers asked if the hike was “reasonable”. This really depends on your version of reasonable. If a reasonable hike to you is over in an hour and a half and can be done in tennis shoes or sandals, then no, the Chief is by no means a reasonable hike. If, however, climbing up (just up, not ever sideways, just up) for almost two hours, sweating like a beast as you clamber over rocks and tree roots, climbing the occasional iron ladder or needing to hold chains to avoid slipping down a granite rock face and then getting rained on and absolutely filthy on your (equally tricky) descent sounds like a reasonable hike to you, then the Chief just might be your idea of a pleasant afternoon.

Sweating and getting muddy aside, TC and I had a great time. Standing more than 600 metres above sea level on a granite peak, feeling the wind and rain whip our faces and knowing there is nowhere to go from here but down was an absolutely exhilarating feeling, worth the sweaty clamber up and slippery descent. TC and I shared a kiss on the summit and headed on our way. My legs were shaking by the time we got back to Shannon Falls but we were both smiling from ear to ear. The entire hike to and from the First Peak took us just under 3.5 hours and we felt sore and exhausted and fantastic. 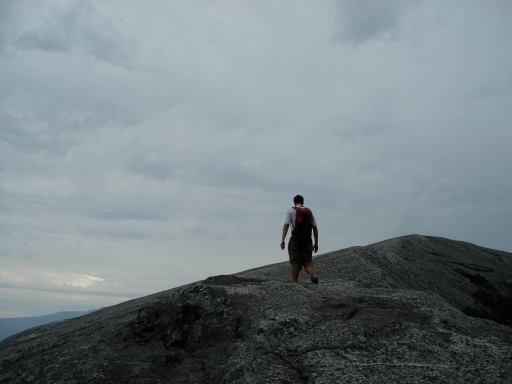 On Tuesday my friend (and baseball fanatic) Colleen was in town and this is why I ended up spending my Tuesday evening cheering and rhythmically clapping for the Vancouver Canadians at the splendid Nat Bailey Stadium (at 4601 Ontario Street, which is, by the way, easily accessible by transit).

According to Colleen, whose baseball-related facts I always trust, Nat Bailey Stadium is one of few beautiful outdoor baseball stadiums in Canada (and 7th largest) and should be considered a gem of Vancouver. I’m not going to argue with that. It really is an awesome venue and we had great seats for only $16 a pop. 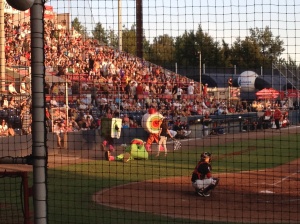 And then, for some reason, sushi raced.

It had been a long time since I’d watched baseball but the rules are pretty simple and the innings are pretty quick. Between innings, the stadium took care to entertain the crowd with various small events: a smart car taking a spin around the diamond, a “sushi race”, dance routines by the ground crew, everyone doing the bird dance in the stands, and finally, everyone singing “Take Me Out to the Ball Game”. I had a beer and a hot dog and reveled in nostalgia and the warm evening.

I really couldn’t have asked for more, except maybe for a win for the Vancouver Canadians. And then, at the bottom of the 9th, they made it happen! What a day. And what a stadium! Nat Bailey is a great place to kick back, shoot the shit, and watch some ball.

So what are you waiting for? Whether you prefer drinking a beer in the stands or scaling a peak, our warm weather and sunny skies won’t last forever. Get the heck outside you lazy bum, and have a summertime adventure.