The first creature to greet us as we disembarked from our AeroGal flight at the San Cristobal airport was a lizard (which we did not take a photo of because our hands were full of passports and coats). I am tempted to say it was a lava lizard, but as we did not yet have a National Park guide with us to tell us what was what, I can say with certainty only that it was a lizard, and that I was happy to see it.

As we got off the shuttle bus at the marina, we saw our second creature, a gorgeous blue heron (our guide was here now so I am confident in this). Walking towards the pier (to the dinghy that would bring TC and me to the Monserrat Yacht, our home for the next seven nights) I began to suspect that there was something unusual about this port town. The seaside promenade was a bit crowded–with sea lions. Sea lions who didn’t seem to be doing much besides loitering, and didn’t seem to care that they were surrounded by people (though one did bark at me when I got too close). It all seemed a bit too adorable to be real, especially when a sea lion was waiting for us on the stern of our yacht. But if I’ve learned anything about seeing sea lions in the Galapagos, it’s that there’s nothing unusual about it. They love to lounge around in the sun, they aren’t afraid of people, and they don’t seem to mind going to the bathroom wherever they happen to be lying (whether on a sandy beach, a rocky shore, or in a gazebo on the boardwalk). 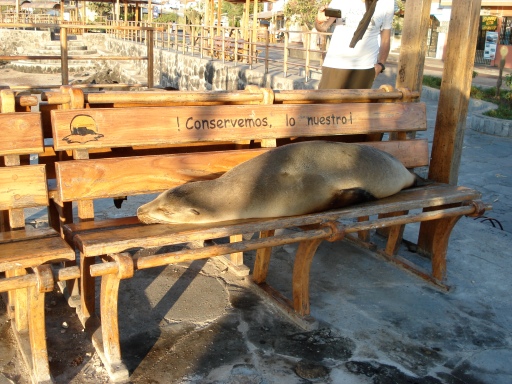 In the afternoon we saw our first giant tortoises in semi-wild habitat at the Galapaguera Breeding Center, in San Cristobal’s highlands. I was a bit disappointed that we only saw three of them (and in partially captive conditions too) but a giant tortoise is a giant tortoise and words cannot describe how absolutely incredible it is to see these creatures in the flesh (or shell, as it were). Suddenly it feels as though you aren’t really where you are, that someone snuck a TV screen in front of you while you weren’t looking. Are you really looking at a giant tortoise in the Galapagos Islands? Yes. Yes you are. Your mind has just been blown. 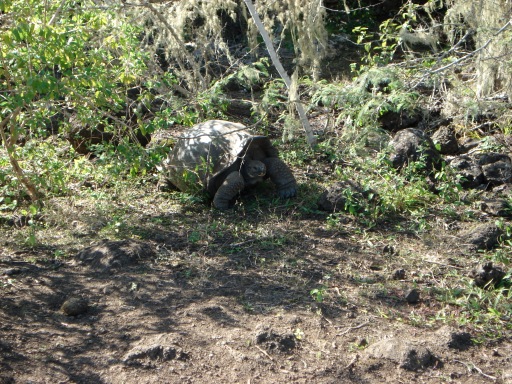 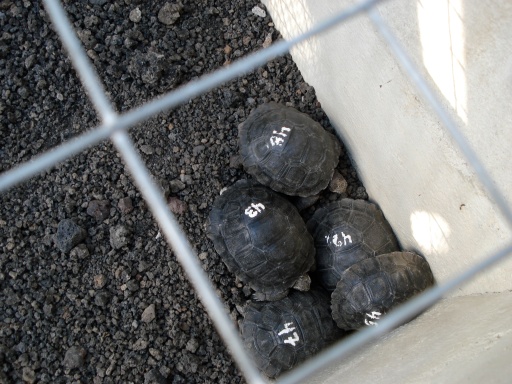 Fun fact about baby tortoises: their sex is determined by the temperature in which their eggs mature. If you want demure lady tortoises, keep those eggs warm. If you want big man tortoises, cooler eggs are the way to go.

As it turns out, this brief introduction to sea lions and semi-captive tortoises was just a preview. We sailed from the port that night and woke the next morning to the turquoise water, white sand, and black volcanic rock of Cerro Bruno (on a different part of San Cristobal). Our Galapagos adventure had truly begun…