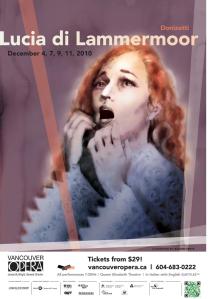 Yesterday was the day I had decided I was going to write a new blog post. About what, I didn’t know. I had planned to write about whether or not Carole James should step down as the leader of the BC NDP, but then she went ahead and did it and saved me the trouble of pondering whether it was going to happen.

I had already changed out of my respectable work clothes and into my “comfies” and was just settling in with my lap top for a promising evening of procrastination when my phone rang. A friend of mine who works at the Queen Elizabeth Theatre had been given a free ticket to the Vancouver Opera‘s production of Donizetti’s Lucia di Lammermoor (an Italian opera set in Scotland! How quaint!) and wondered if I would like to go. Free opera? You bet. I was out of my “comfies” and back in my “look respectablies” in half a tick and out I went into the wind and the rain.

I’ve been to the opera before, but not in Canada. A few Christmases ago I was lucky enough to see La Traviata in Bassano del Grappa. The only problem was that Italians don’t need surtitles to understand Italian operas so I didn’t really get much past the general gist. I was excited to be seeing an opera that provided surtitles so I’d know what the heck was going on.

I would like to state that the acoustics in the Queen Elizabeth Theatre are excellent. I was sitting pretty high up in the balcony and I could hear every sound onstage. The man unwrapping his candy three rows down sounded like he was unwrapping it in my head (thanks guy! You really made Act II for me!). Most importantly, of course, the incredible voices carried.

It always annoys me when Famous Old Shows (like this one) are full of men with only one main character being played by a woman. But what a woman! In this production, one is all you need. I know nothing of sopranos, even less about “coloratura” sopranos, but I thought that Eglise Guitierrez was exquisite as Lucia. She was a powerhouse who carried the show for me. I’ve always imagined that high notes are shrill for everyone, even if you can hit them, but every sound from Guitierrez was as smooth and pure as a crystal bell. Her voice didn’t sound like it was coming from her mouth, it seemed to be coming from the entire theatre. She sang her ass off and made it look easy. I was awe struck.

I’m not a big opera buff and when I see classical performances like this I’m always worried that I’ll fall asleep or be bored stiff (even if the music’s great) but I really enjoyed myself.  Obviously, the vocal athletics helped, as did the surtitles which were sometimes a little funny (“Oh. I cannot contain my anger. My blood blazes.”) but were sometimes downright poetic. It may have been my hormones but when the betrayed lover Edgardo crashed Lucia’s wedding to another man, and the surtitle to his part read, “I am a martyr to a deceiving heart” I was moved to tears. Oh Edgardo! It’s all a misunderstanding! If you would just listen! But no, he didn’t listen. He threw his ring at poor Lucia and sang something scornful and Italian at her before fleeing the scene. Epic.

The highlight for me was the Mad Scene, when the blood-stained Lucia entered and began to sing Il dolce suono.  A thought stuck me: I know this one! Why do I know this one? Well folks, I know this one because I have watched the movie The Fifth Element a gajillion times and Il dolce suono is the aria the blue diva starts singing before she goes into her Techno Opera. You learn something new every day. Sweet.

Not your grandmother's Lucia

While I had a lovely time and am extremely grateful for my free ticket, I’m not sure yet that I’m the kind of person who should be a regular opera-goer. Even though my heart went out to Lucia in her madness, I couldn’t help grinning as brother Enrico awkwardly moved her unconscious body a foot or so upstage because she had “fainted” right where the scrim was going to come down. When Lucia’s dying lover Edgardo gave his last fatal flop and collapsed at the end of Act III it was just too much for my silly little soul and I emitted an audible snicker (carried far and wide by the beautiful acoustics). Whoops. Sorry everyone. I really am moved, it’s just…  tee hee.

Despite not being sure that I’m mature enough for the opera, I had a top-notch evening and if tragedies and good music are your thing I heartily recommend Lucia di Lammermoor. The last two performances are December 9 and 11 at 7:30 p.m. at the Queen E. I have heard good things about Vancouver Opera’s season so far so please check them out at www.vancouveropera.ca if you are an opera lover or are thinking of giving it a whirl.