I think by now I have made it pretty clear that I love Vancouver, and East Van in particular. But sometimes, this city is a drag. Day after day of grey sidewalks and grey skies makes even my imagination grey.

Enter a very appealing proposal that I use my recent three-day weekend to go to Salt Spring Island. I had never been before. I said yes. I may have even said, “Hurrah!”.  I was pleased.

Apparently, one can take a little float plane from downtown and be on Salt Spring in under an hour. The CHEAP way to get to Salt Spring involves ferries and several hours. On the way there we took the ferry from Tsawwassen to Swartz Bay and hopped onto what can only be described as a cute but dumpy little ferry to Fulford Harbour. Once landed we were literally twenty paces from a lovely little eatery called the Rock Salt Restaurant & Cafe.

I wish I had taken a picture of the interior of this restaurant: yellow walls, big windows, and stained glass everywhere. It was a children’s drawing come to life. Although Salt Spring was all aflutter that Raul Pacheco had recently posted a very positive review of the Rock Salt’s Burger Deluxe in his blog Hummingbird604, I decided to go with the Mexicana naan sandwich and it was delightful. I don’t consider myself much of a foodie but I think it’s worth noting that the Caesar salad that came with it was good too. I have been to many restaurants that served great main courses but sub-par salads and the Rock Salt was not one of them. 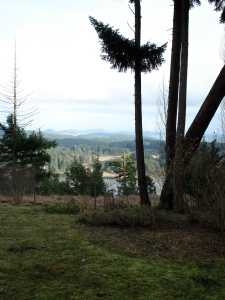 The view from the home we stayed in.

Our hosts for the weekend were relatives of my travel companion: a very hip couple and their two adorable and energetic daughters. Within 20 minutes of arriving at their house, we had listened to three radio plays, watched two hip hop dance routines, and one incredibly literal sock puppet show. I really must take the time now to thank our hosts whose warmth, humour, and hilarious children made my weekend.

My first evening in Salt Spring was spent in good company, dozing in front of a wood stove and listening to Joanna Newsom. There was also some drinking of Glenmorangie. I know nothing about scotch. Apparently this was a very good scotch. I believe I have tried scotch, once before, on Mayne Island (what is it about the Gulf Islands and scotch?), and I had a few sips of the Glenmorangie this time, but unfortunately, not having acquired a taste for scotch, the quality and the glory was a little lost on me. Made me feel quite warm though. Warm and tingly. And oh-so-fancy.

I slept through my ni 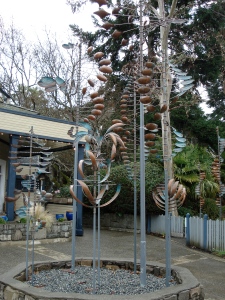 ghts in Salt Spring in the kind of deep dark you can only have far far away from the city. The wind was howling in the trees and I was snuggled in a comforter. I cannot think of a more cozy arrangement.

As beautiful as Salt Spring Island is, one cannot control the weather. In March, the weather is rainy. This meant a lot of indoor visiting (more dance routines) and naps. My little outing for this particular adventure on Salt Spring was a trip to the village of Ganges to have lunch and poke around in the shops.

One shop that was a particular favourite of mine was Black Sheep Books, a used book store with two floors. This place is literally stuffed floor to ceiling with books: new(ish) books, antique books, travel books, children’s books, all carefully shelved in their own labelled sections. The shop also had several out of the way nooks, perfect for those who have always dreamed of having a romantic tryst in a book store. The upper floor houses a collection of books and original prints by Nick Bantock, an artist and author of the “Griffin & Sabine” trilogy. According to Wikipedia (and our hosts for this adventure), Bantock is based in Salt Spring. Sadly, I did not see Nick Bantock (whose work I know through his book “Averse to Beasts”) but I feel as though I have had a brush with literary fame all the same.

At the marina in Ganges. I love boats.

For lunch, we stopped in at the Oystercatcher Seafood Bar & Grill. I had the Biltmore Chicken Burger which was fabulous (can’t resist any sandwich with pesto) but I think next time I will order the fish and chips. I tried a piece of my travel companion’s and it was perfection, as far as fish and chips go. The texture and the taste were exactly what they should be. It’s probably worth heading back to Salt Spring just for that.

It was a sad day when we had to say good-bye to our amazing hosts and head back to the busy city. This time, we took the ferry that stops on Mayne and Galiano before heading to Tsawwassen. The trip between the islands was beautiful but the crossing over the Strait of Georgia was a little rough for my liking. I spent a lot of that time squeezing my eyes shut and wishing I had taken the float plane.

Seasickness aside, if I had to sum my adventure up in one word I would say it was restorative. I am not from the city. A city is not the home of my soul. No city, no matter how beautiful, can make up for how fully relaxed I felt the moment I reached Salt Spring. I have a feeling my little weekend excursion was the beginning of a long and beautiful friendship with a charming and beautiful island.

Passing through the Gulf Islands on the ferry home

7 thoughts on “Adventures in BC: Salt Spring Island”