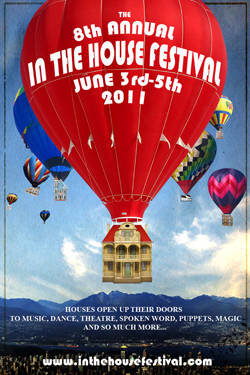 Music. Dance. Circus sorcery. Puppets. Beautiful East Van homes in the Commercial Drive area opening their doors to the public. Is this some eccentric real estate fantasy? No, it’s the return of the In the House Festival invading living rooms with its unique brand of community and magic in East Vancouver.

I have spent so much time lamenting over the hard knock life of those working in the arts that when Mads, an intern from the festival, asked me on Twitter if I would be interested in writing a piece about this year’s In the House Festival, I jumped at the chance to help promote a festival I have enjoyed in the past. I asked Mads if I might be able to ask a festival representative some questions for the post and was immediately put in touch with Myriam Steinberg, the Artistic Director of the In the House Festival, who has been involved with the festival since its inception in 2003. Myriam was so obliging and her answers so detailed I’ve included them here. [My questions are in bold, Myriam’s answers in italics]

The idea of an entire festival dedicated to bringing performers and audience into people’s homes is quite unique. What particular Vancouver cultural needs do you feel the In the House Festival addresses? There are a couple. Vancouver has a dearth of venues that are either financially accessible, or that are open to a variety of disciplines. It’s also difficult to find a venue where people will have focused attention on the performer. At In the House, we provide the space where the audience is 100% paying attention to the artists, the artists can do their thing, explore their genre, test out new material, interact directly with the audience and get paid more than the average “pass the hat” situation that they encounter in lots of bars and coffee shops. On a community level, In the House brings people together in intimate settings which create a trust and hopefully builds friendships and dispels stereotypes about neighbourhoods. 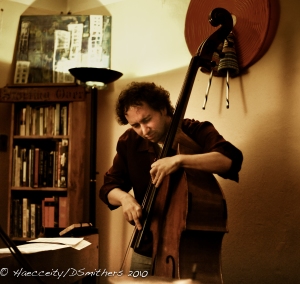 How does this year’s festival differ from years past? What are you particularly excited about this year? What have you learned from past years? This is the 2nd year where we’ve added a 3rd night to the festival. We’ve [therefore] been able to add four more shows to the line-up. This year, we are featuring a bunch of upcoming youth in amongst the seasoned performers. Travis Lim does a killer Michael Jackson. I’m really excited to see him perform. At age 9 he’s already won 13 medals for dance! The Whitridge Brothers (11 and 15 years old) are jazz musicians who are included in the already stellar line-up. I think it’s important to give a voice to kids who have amazing talent. Age is no marker for talent.

I’m excited to watch the Cabaret so Mignon (magic, bellydance, music, clowning), to learn how to swing dance in Swingin’ Times, and of course I’m always looking forward to the finale. This year it’s a Blues Circus.

I guess the most valuable lesson I have learned from organizing the festival is to plan and organize well ahead of time and to keep expanding the network that surrounds the scene. It is thrilling to see so much great talent out there, but also to see how many people are willing to help volunteer during these festive days. 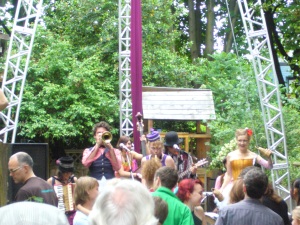 Tell me about the performance spaces (the homes). Are audience members permitted to use the washrooms? Are many of the homes wheelchair accessible/can arrangements be made to accommodate an audience member with disabilities? Any other amenities offered by the spaces (food available to buy, etc.)? One of the most important parts about the shows is the fact that they are taking place inside people’s living rooms. It gives the shows an intimate and much more engaging atmosphere you would not find in a lot of other places. We do have port-a-potties available by Festival Central [Napier and Victoria] which we encourage festival goers to use, instead of the house washrooms, but of course people are generally allowed to use the washrooms of the houses during a show. However, they are not allowed to go explore the rest of the house outside the performance space and the bathroom. It’s really important to respect the privacy and safety of the homeowners who are so generously donating their space to a show. The backyards are generally wheelchair accessible, and about half the shows are in a backyard. Some of the houses are as well, but less so. We do have a ton of volunteers though who are available to help [or] we can also install a ramp if we have enough notice of someone in a wheelchair coming to a show. We certainly don’t want to exclude anyone from the In the House experience. In terms of food, there will be snacks and non-alcoholic drinks to buy, although we encourage people to use the “dinner hours” to explore the nice restaurants around Commercial Drive.

If I were a Commercial-drive area home owner interested in opening my home to the festival, where could I go/who could I contact for more information? You can contact me, Myriam, at info@inthehousefestival.com or 604-874-9325. The website also has information about the shows we put on and what it means to open your home to a show.

How can artists apply for/submit their work for consideration for inclusion in In the House? They can email or mail me a demo of what they do. I prefer to hire performers from the Lower Mainland.

And finally: Do you have any important information/tips for audience members to make their In the House experience go as smoothly as possible? If you want a guaranteed seat, buy your tickets in advance. Shows tend to sell out. Also, if you’re buying your tickets on site or have a pass, get your tickets from the box office [Napier and Victoria] as early as possible. Seating is first come first served so if you want a good not squishy seat, get your place in line early.

I am a big fan of the idea of meta-theatre, and the idea that the experience of a performance is not confined only to what is happening on the stage space. The concept of this festival suggests an openness of spirit on the part of performers and audience and a huge amount of trust on the part of those who have turned their homes into a venue for performance. Is this the kind of experience you wish to participate in/support? Check out the festival.

The 2011 In the House Festival runs June 3-5 in the Commercial Drive area.

For schedule information and to learn more about the Festival’s performers, click here.

Thanks Mads and Myriam for giving me the opportunity to learn about and promote this special kind of East Vancouver culture. It sure beats the hell out of whining over the sorry state of the arts. 🙂