All my very best,

My plan last night was to write this week’s post about an episode of violence I witnessed in the Downtown East Side, and how witnessing this violence, and observing my reactions to it, changed me. I also wanted to write about a telephone call I received in April, informing me of the senseless death of a childhood friend (I say senseless not because I don’t know exactly what happened, but because I don’t know why) and how this has changed me. I am 25. I have seen violence. I have known a death. And I will never be the same. I wanted to write about that, about how growing up is about these milestones, these little deaths of innocence.

But this morning, my TC broke the news to me that Jack Layton had died. I am glad he told me because otherwise I wouldn’t have known until being told by coworkers or by Twitter. I appreciate that he knew me enough to know that hearing this news would wound me. “Faithful are the wounds of a friend”, and this is a wound that was better received from a friend. Just as I can remember exactly where I was when I heard that Dr. Suess (one of my childhood heroes) had died, I will remember exactly where I was as my TC broke the news of the death of the hero of my young adulthood.

I have been an NDP supporter since I was old enough to think about Canadian politics (about 10 or so). This is not out of line with my upbringing, and even as an adult what I have experienced, read, heard, and learned about the world has not changed my views. Is Jack Layton my hero simply because he was the leader of my favourite political party?

Former NDP leader Alexa McDonough was not my hero. I’m sure she’s a great lady, who cared passionately about the same issues I do, but she was not my hero. When Jack Layton became the leader of the NDP he was not my hero. I thought he looked smarmy and I did not like his mustache (now, of course, I am very fond of the “Trustache” and I wish so badly that I could see that glorious mustache again).

Jack Layton was not a hero I chose to follow blindly. I believed in his party (or rather I believed in their values) but I did not yet believe in the NDP’s ability to effect real change in Canada. Over the years, as the numbers of orange seats in Parliament grew, Jack Layton began to earn my respect. And then he earned my trust. Yes, he represented the party that represented my values. But he also represented the idealistic and civil vision of Parliament I had had when I was younger. For example, I remember once when Jack Layton did allow a few members of the NDP to vote against the rest of the party in a matter that concerned their constituents. Some may call this weak, I would call it an understanding of how the practice of electing a Member of Parliament to represent your constituency is supposed to work. By allowing flexibility within the party, he demonstrated to Canadian voters that their vote did matter, their choice of a particular MP did matter, and that Parliament as an institution is meant to serve constituents, not party lines. I respected him for this.

During the last election, the NDP managed to side-step the Conservative mud-slinging and the go-to Liberal defense-mode. Jack Layton was able to keep his eye on the prize and stay focused on his hopes for the country. Without warning, one day his talk of “When I am Prime Minister” no longer sounded like the pipe-dream of some aging hippie with a 70s mustache, it sounded like an exciting possibility. When few Canadians believed, Jack Layton did. And then I did too. I felt that my vote had mattered. I felt that I was part of something. For the first time, even though frightened of the Conservative majority, I felt that we were heading to something better, that Harper’s majority was the dark before the light, and that one day Canada really would be the country I thought it was when I was a child. In interviews and public events, Jack Layton seemed to demonstrate a genuine warmth and amiability, qualities that eluded Stephen Harper and Michael Ignatieff. I trusted that he meant what he said, and I was not afraid of what he would or would not do for my country.

When I heard that Jack Layton was sick again, my first thought, instead of a concern for his health, was “No, he can’t be. We NEED him.” And this means I had not learned enough. It’s not enough to believe in Jack Layton. Jack unfortunately could not be with us forever. It’s not enough to put your faith and trust in one person and hope they’ll take care of everything. They can’t. Though I do wish with all my heart that Jack Layton was still here, and healthy, I don’t know that I would say at this point that “we need him.” We need us. What Canada needs is for people who think “we need Jack Layton” to realize that what they need is themselves. We need to demand the same level of dedication, passion, and accountability that Jack Layton demonstrated from all of our politicians. We need to demand this by voting, by joining parties, by examining ourselves and deciding what we believe in. We need to stop sitting back and thinking that one amazing man with a mustache and a dream is the answer to our problems. Though Jack Layton was a true leader, and though he was the person in whom I had placed my hopes, what I need now that he is gone is not Jack Layton. What I need, what we need, is to emulate what we admired about Jack Layton, to demand this of ourselves and others. 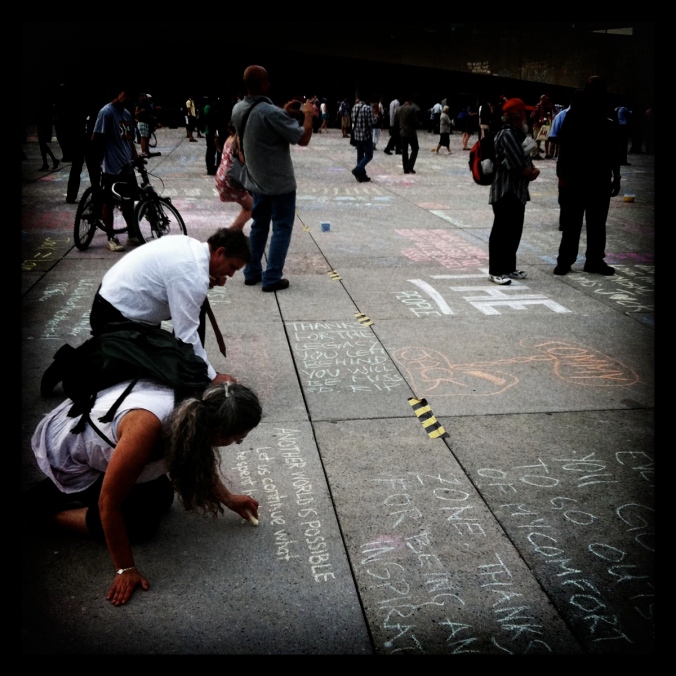