Ever since I discovered that it existed (during a Neworld Theatre Podplay as part of last year’s PuSh Fest), I have been intrigued by the Vancouver Club. I had no idea what it was, except that it was a club, with members (rich members), and that it was fancy schmancy. Call them what you will (the upper crust, the 1%, old money, or rich snobby A-holes), a certain kind of person becomes a member of the Vancouver Club and, economically at the very least, I am not that kind of person. For this reason, never in my wildest imagination did I think I would ever be inside.

Until last weekend. Turns out, my TC’s former employer is a member and he threw a fancy bash at the Vancouver Club to which my TC was invited. I was invited too, as a very excited and curious +1. I was going to a rich person club that would have rich person things and be full of rich person details!

In case you missed that last part, there were rich person details like a FIREPLACE and a CHOCOLATE FOUNTAIN. In fact, TWO chocolate fountains: one dark, one white. With whole strawberries, pieces of pineapple and melon, and square powdered marshmallow (no store-bought Jet Puffs for us) for dipping into the fountains with fancy long sticks. Rich person details like more tastefully good looking people wearing tastefully well-fitting aprons bringing out delicious eats like vegetarian spring rolls, and tiny mini pulled-pork taquitos (in addition to the chocolate fountain and the cheese table). Rich person details like random antiques and pictures of the Queen filling the hallways.

Probably the most exclusive rich person detail in the whole place was the beautiful foyer with the glass doors at the very end that said “Members Only” on them. Even though I have now been inside the Vancouver Club, I very much doubt that I will ever pass through those particular doors.

And to be honest, although I enjoyed my swanky night at the Vancouver Club very much, and it seems to be a very well-run establishment, I very much doubt that I would want to.

Funnily enough, it was not anything I encountered during my night on the premises that turned me off the Club. It wasn’t even the extremely prohibitive cost (I mean, if I was super rich and had time to sit around in posh clubs, maybe I would enjoy the use of the beautiful facilities available). It was the information on the Vancouver Club’s own website, on their Membership page, that soured me on the idea of clubs for fancy folk. 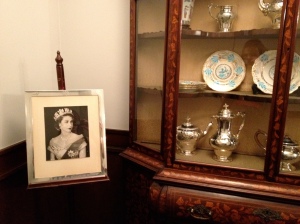 Think even a posh old club in Vancouver would be a little more progressive than posh old clubs back east? It doesn’t seem like it. Instead of simply outlining the many luxurious amenities of the Club, the Vancouver Club has decided to make it a little easier on its potential members by separating certain amenities and activities into “For Women” and “For Men” categories. For the gents, what could be better than a “Black Tie Lobster dinner” followed by a visit to Bar 3, a space which evokes “a more gentlemanly era”, where the guys can pull out “a bottle of single malt”, “shoot some pool”, and “talk shop”? There’s even a barbershop where you can get a shave!

For the women, however, the first amenity mentioned is the fitness studio where the ladies can attend Pilates classes and consult with a personal trainer. Then they have the privilege of moving on to the candlelit Bar Lounge where they can plan “quirky and sophisticated” parties for their friends’ birthdays. And let’s not forget that “Next week is a port and chocolate tasting hosted by colleagues and fellow Run for the Cure volunteers.”

Though there is absolutely nothing wrong with the various elegant (and charitable) activities listed, as a grown woman in the year 2012 I do tend to resent the suggestion that some activities are better suited to me based on my gender, especially when the guys get to eat lobster, shoot pool, and talk shop, when my role appears to be keeping my figure, planning parties, and hosting fancy charity events. Perhaps I’m being overly sensitive (and for those membership fees I think I’d have a right to be), but it just seems a little out of touch with the times, doesn’t it?

It also weirds me out when, of an entire website featuring beautiful photographs, only one person pictured is non-white (or maybe two, there are a couple blurrier shots). Even given my own obvious pallor, a club whose promotional material gives the impression that they are mainly trying to appeal to white people does not appeal to me. I am 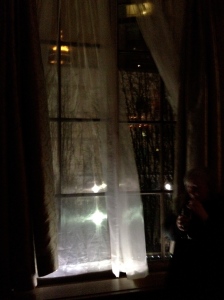 going to give the Vancouver Club the benefit of the doubt in this post and assume that this is not intentional, but in these times of rumored declining memberships for the Club (“rumored” being the operative word here) and ever-increasing multiculturalism and celebration of diversity in Vancouver (obvious to anyone who is paying attention), this is a PR mistake they can’t really afford to make.

So thank you for a wonderful and classy evening, Vancouver Club. You have a beautiful building, on-the-ball employees, and gorgeous facilities. But should I ever become a billionaire and veritable Vancouver VIP, I’m afraid I shall have to give your Club a pass. You see, in my adult years I belong in 21st century Canada. A club where predominately white men sip single malt and talk about their high power jobs and predominately white women look pretty and plan parties does not.

One thought on “About Town: Nifty at the Vancouver Club”