The official purpose of this post is to direct you to my coverage of the 2012 Jessie Richardson Theatre Awards on Hummingbird604.com. The blog’s creator and chief contributor, Raul Pacheco-Vega wasn’t able to make it so I was only too happy to cover the Jessies for him again this year.

Hold up, you might say, this is not the first time you’ve mentioned Raul or covered something for his blog. Who is he, and how do you know him? Is this “Raul” a real person or some magical blogging elf man? 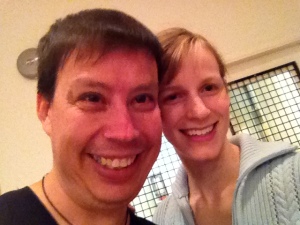 This really isn’t a good picture of either of us. Firstly, blame the fact that we took the photo ourselves. Secondly, blame a wee little bit of tequila.

The answer is that while Raul is probably, secretly, a magical blogging elf man (in addition to being a professor and consultant), he is also a friend of mine and is definitely real. We were introduced by a mutual acquaintance at a gala in 2010 and took a shine to one another. We stayed friend-ish but it wasn’t until a few months later when I started blogging that we became friends (I think it’s funny how the internet plays such a big role in facilitating new friendships nowadays, but I’m not complaining).

Though Hummingbird604.com is a very different blog from mine (in terms of its influence and reach, the number of times it posts, the fact that there are guest contributors, the “lifestyle” features that I don’t write much about, etc.), Raul has been very encouraging as I do my thing. Mostly, I draw on his experience and moral support, but he has also been tuned in to what I like to write about and has brought appropriate opportunities my way. Raul is the reason I was put in touch with Jessie van Rijn, General Manager of Carousel Theatre for Young People, last December, and reviewing Carousel shows this spring has been nothing but fun.

Friendships nurtured via the Internet are a relatively new phenomenon, but that doesn’t make the beneficial relationships that result any less real, only different. Friends are good to have, no matter where or how you met. And good friends? They’re just plain great.

And that, my dears, is why I always (sometimes profusely) say thank you to people like Raul, or Lois Dawson, or any of the other people who have provided fun opportunities to blog about things I enjoy. My blogger friends have been very good to me, they are good for me, and I’m always grateful for that.

If you read my coverage of the Jessies on Hummingbird604 (and I hope you do since technically I guess that was the point of this post), you will see that gratitude played a huge role in the evening and in the spirit of that gratitude, I just want to say thank you to the people who keep sending good things my way. You’re awesome!

2 thoughts on “Covering the 2012 Jessies for Hummingbird604.com. Awesome!”