It should come as no surprise to anyone that has read any of my political blog posts that I am a card-carrying member of the federal NDP. I joined before Christmas because I wanted to be able to cast my vote for the new Leader of the Opposition (such fun!).

What was a surprise to me (though not a necessarily unpleasant one), was that membership in the federal NDP automatically made me a member of the BC NDP as well. That is why I was the recent recipient of a disappointing mail-out called the “BC NDP Pre-Election Opinion Survey”.

Now, I love surveys. Love them. I love sharing my opinion (again, no surprise). I have not been very involved in BC politics and I was excited at the prospect of my opinion helping shape the direction the party would be taking in the next provincial election.

Much to my dismay, this “survey” proved to be little more than a request for donations, and a collection of questions so leading and so obvious you’d have to be a Nazi to answer any differently than the party expects you to. Since this survey was sent only to BC NDP members, I suspect Nazis were not given the opportunity to respond.

An example of the in-depth research this survey is doing.

Of course it’s important to ask questions about housing, persons with disabilities, the economy, education, etc., but the way these questions are phrased simply asks questions we all know the answer to. I think I can safely say all British Columbians (no matter which party they support) would agree that people with disabilities should be provided some assistance and security and that well-paying jobs are a priority for the province. What the survey failed to ask was how we felt about how the BC NDP proposes to do this. How is good housing for adults with disabilities to be secured? How will apprenticeship programs be expanded and well-paying jobs created? Who will pay for these initiatives?

A more useful survey would be one in which respondents were asked to rank the issues/iniatives which were most important to them (in the economy, education, health care, etc.), and were then asked what they would be willing to see their provincial government do to make these initiatives happen. Would we be willing to see income tax increases? Corporate tax increases? Would we be able to stomach cuts in certain areas? If so, which?

A criticism of the BC NDP that I have heard repeated several times since moving to BC is that although they are against whatever the BC Liberals do, they themselves do not seem to have a plan and do not seem to have any solid alternatives to offer. You can’t simply decry cuts to this and that without any alternative plans for balancing the budget. Although I will likely give the BC NDP the benefit of the doubt and vote for them in the next provincial election, I can’t blame British Columbians for having little confidence in the party, especially when its own members are receiving stupid surveys like this one.

After ripping open my survey envelope in delightful anticipation of participating in the political process and having my hopes immediately dashed, what I found most galling is that the confidential survey finishes off with a money grab.

Soo confidential! With my name and address on it and everything!

I’m used to being asked for donations so that didn’t bother me much, but I couldn’t believe that my “No” option for donating was enclosing $6.50 to pay for the privilege of answering this absolutely useless survey. If the survey questions had been decided on as the product of intense research and thought I would have likely been happy to support the initiative. I do not feel like I need to pay $6.50 for what is essentially junk mail.

While I’m in the process of bashing the provincial party I will likely vote for, I’d also like the point out that the letter I received with the survey was stupid too. 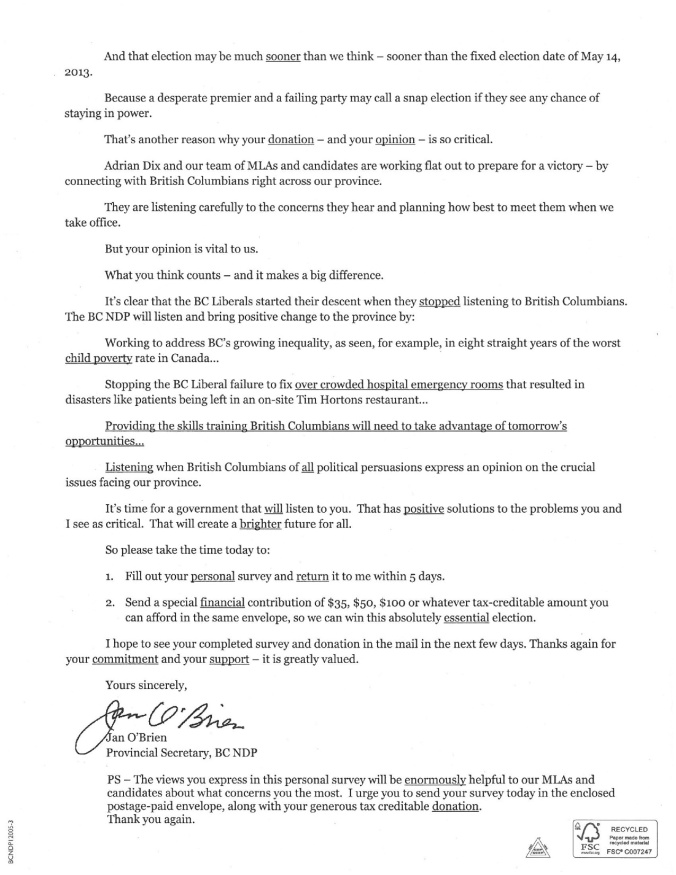 As you can see, the letter uses underlining to great effect. Good god. I’m not in elementary school anymore. I don’t require underlining to tell me which words are important. Remember that this is a letter to the BC NDP’s own members, not someone completely unfamiliar with the party. If I was so stupid that underlining key words would sway me, I wouldn’t be voting NDP (the Liberals and Conservatives have better soundbites and use more repetition). Eugh.

You may ask why, if I am an NDP-supporter, I would write a post criticizing and poking fun at the BC NDP. The answer is because I want to vote for them, and I want to vote for a party that doesn’t underestimate my intelligence. I want the BC NDP to step it up. Ill-conceived donation drives like this one (masquerading as surveys) do not increase my confidence in the party.

C’mon BC NDP. If you can’t give me solutions right now, at least show me that you’re making an honest and genuine effort to come up with some. Until you do, your sucky missives are going straight in the recycling.