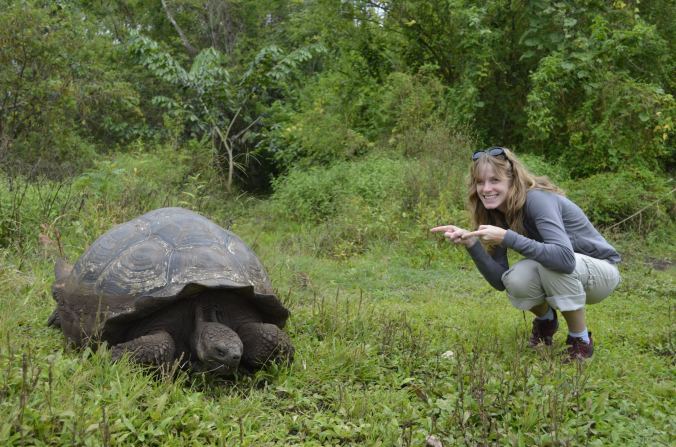 We called him Hank. (photo: TC)

This day was the Day. The Day my TC and I had been waiting for. The reason we flew thousands of kilometres to Ecuador, and on to the Galapagos. This day, on Isla Santa Cruz, was the Day of the Tortoises.

This day started earlier than our previous days on the Monserrat, with breakfast served at 6:00 am and our “go to shore” time set for 7:00. For those of us who weren’t continuing the cruise (which was everyone but my TC and I; even our guide Jose was leaving us), there was only a little time to visit the Charles Darwin Research Station at the outskirts of Puerto Ayora before speeding away in a bus for the Baltra airport.

The work of the Charles Darwin Research Station (www.darwinfoundation.org) is incredibly important to the survival of the unique and varied species that call the Galapagos Islands home. It also ended up being the only place we saw a land iguana during our trip (like the marine iguanas but larger and yellow!). That said, after experiencing so many incredible species in the wild, viewing iguanas and tortoises in captivity was…anticlimactic. Had Lonesome George still been alive, I may have felt differently (as it was, we paid our respects at his old enclosure), but I wanted to see tortoises just, y’know, out there. Being tortoises. Doing tortoise stuff (I also wanted to take a tortoise home with me but I knew that wasn’t going to happen).

Once everyone (and I mean everyone) else was packed into a bus bound for the airport, TC and I were left by the side of the road with a vague promise that a dinghy from the Monserrat would meet us at the main pier around 11:30, and that the main pier was “that way”. Huh.

As it turns out, Puerto Ayora, though the largest town in the Galapagos, is not a metropolis by any means. There is really only one main drag, so TC and I followed it past souvenir shops and restaurants, construction pits and tourism offices. Within 15 minutes we had reached the main pier at Puerto Ayora, with over two hours to kill.

By the time the dinghy came for us we were more than ready to return to the boat, enjoy a nap and a long shower, have lunch (once again, gloriously alone), and sit on the deck in the sun while we waited for the next group of passengers to arrive.

Sounds nice, you say, but what about the tortoises? Good point, what ABOUT the tortoises? Well, once our new group was settled in, we went back to Puerto Ayora, boarded a bus, and headed off to the Rancho Primicias in Santa Cruz’s highlands. The Rancho Primicias is a private ranch next to the El Chato Tortoise Reserve. Giant tortoises wander in from the reserve, and the owners of the ranch are content to let the tortoises trundle around and eat plants while they (the ranch owners, not the tortoises) collect a small fee from tourists and serve food and coffee at a little cafe on site.

This was IT. Our new guide, Pedro, was incredibly knowledgeable and while all I wanted to do was run around the whole ranch screaming “Tortoises! TORTOISES!” I managed to learn a lot in spite of myself.

There is nothing quite like watching a giant tortoise in the wild (my poor photography skills and old Sony Cybershot really can’t do them justice). It is incredible–like watching a dinosaur. Unless we got too close, the tortoises seemed pretty indifferent to people, and mostly ignored us while they bathed in the mud or slooooowly stretched their long wrinkly necks to chomp on some weeds. FYI, the tortoises on Santa Cruz are dome-shelled tortoises, and they are so awesome it hurts.

Rest in peace, dear George. I will see you in my tortoise dreams.

I’m sure I could have fit one in my pocket…