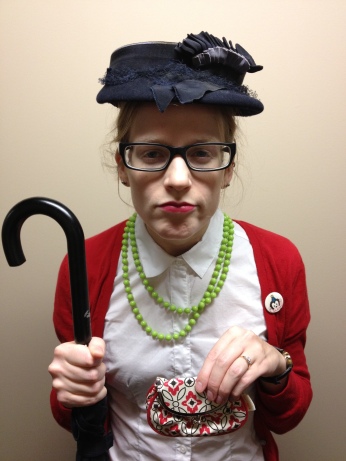 You get off my lawn.

A few months ago, I found my first wrinkle. It had stealthily cozied up along the left side of my mouth pretending to be a smile line, but I eventually noticed that it is present whether I am smiling or not. Being a wrinkle. Breaking my heart a little bit.

People who know me may be surprised to learn how vain I am, especially since I’m incredibly lazy when it comes to my looks (I own a blow dryer but I use it maybe once a year, and I usually can’t be bothered to do simple things like throw on a pair of earrings for a night out). Despite not being very fashionable, the fact of the matter is that I am vain. Because I like the way I look, I can afford to be lazy, which is nice I guess (yay self-esteem!). And I don’t want the way I feel about myself to change just because I have a wrinkle. Or two.

I knew it would happen eventually, and I always imagined myself aging quite gracefully when the time came. I assumed that when I realized I had grown older I’d be in such a self-actualized place in my life I wouldn’t try to resist–I’d just throw my grey old hair in a bun and go with it. Wide brimmed sun hats! Glasses on a chain! Whooo! But maybe I’m not ready yet.

I am aware that 27 (and a half) is still young, but as 29-year-old “spinster” Valancy Stirling points out in L.M. Montgomery’s The Blue Castle, “Yes, I’m ‘still young’–but that’s so different from young.” And she’s right. To be young is to be unaware and unappreciative of your youth, to be in the process of blossoming with the promise of the best yet to come. To be still young implies that the sand in the hourglass is slipping swiftly through your fingers–to be still young is to be old soon. And it’s just not fair!

I didn’t have great skin in high-school, and I had not yet grown into my long limbs. The Teen and YM magazines I read all promised me that confidence and poise would come from being myself, and that my skin would be blemish-free once I was an adult. I clung to the idea that even if I wasn’t beautiful yet I would be someday. And my skin would be perfect. And I’d be a femme fatale. Or something. Even as I realized that the magazines had lied to me (sleep-deprived semi-impoverished stressed-out university students still get pimples, I’ll have you know), I held on to the dream. Eventually, my skin did clear up (mostly), and I did get better posture and self-awareness, and I did learn to comport myself with a little bit of grace, but even then I still believed, deep down inside, that a greater beauty awaited me. And I’m not talking about some kind of greater inner beauty that comes with wisdom and selflessness and spending one’s life in the service of others and blah blah blah. I’m talking a purely superficial, it’s-all-about-the-wrapping-paper kind of beauty. And now I’m realizing that whatever my greatest moment of superficial beauty was, it’s already happened. I may still be a big bloomy blossom, but my petals are starting to droop. Sigh.

Which I know is okay. Adults who are older than me will think I’m being awfully stupid and I am. But I don’t think I really realized how much “being young” has been part of my identity until I found this little wrinkle, and understood that youth really is fleeting. “Gather your rosebuds while ye may” goes the old refrain, and it looks like I’m just about out of rosebuds. At some point, I won’t be a “young woman” anymore, I’ll be a “woman”. And then a “middle-aged woman” and then an “old woman”.  And then dead, I guess, though at that point wrinkles will no longer be a problem.

My little tempest in a teapot has demonstrated to me that my own ideas of both age and beauty could use some reevaluation. As much as I like to think I am impervious to the dreaded “media” and their “ideals” of beauty (especially since I no longer subscribe to Teen), on some level it has registered that today’s young starlets are younger than me, not older, and on some level I think that bothers me. There goes my chance to be on the Disney channel.

I am also getting the strong feeling that ours is a culture that places extraordinary value on the achievements of the young, and on achieving while you’re young. Of course young people should be encouraged, but I don’t want to feel that my time to make a mark for myself is over just because I can no longer be a child prodigy. I’m tired of seeing internet bucket lists of things I must do and places I must travel before I’m 30 (btw, internet lists are usually written by people like me, who are not necessarily any more qualified or wise than anyone else but who have a  laptop and an internet connection and some time on their hands, so I wouldn’t take them too seriously). I’m tired of being told there are things I must do before I have children (bullshit–my parents did tons of cool stuff while they had us, though not without more effort I presume). The fact of the matter is that people are living longer than ever, which means the percentage of our lives that will be spent being “young” is going to be smaller and smaller. If we believe that we are done learning, done exploring, done being physical (in every sense of the word) and done being beautiful just because we are not “young” anymore, we’re going to spend most of our long lives jealous and miserable and buying shit we don’t need. 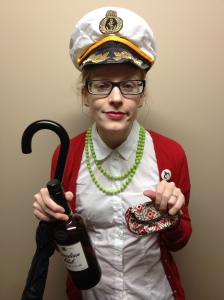 Which is stupid. Alice Munro just won the Nobel Prize for Literature, and she’s in her 80s. Assuming my good luck holds, I have decades of life in which to grow and have adventures and become good at whatever it is I do (which is not to say I can spend my remaining “youth” doing nothing, but just that I don’t need all my life to happen now now now).

As for my wrinkle, I’ll try to remember to wear more sunscreen and otherwise not worry about it. The only person I really feel I need to be attractive to (besides myself) is my fiance, and TC’s not a superficial person. Besides, we’ve spent so much time in the sun that eventually, we’ll both look like a couple of old leather bags anyways. Which is fine by me, as long as we’re together (and as long as we’re sun smart!).

Sometimes, it takes an early wrinkle to remind you that you’re still growing up. All the time. Every day. Which is fantastic. Now where are my glasses on a chain?