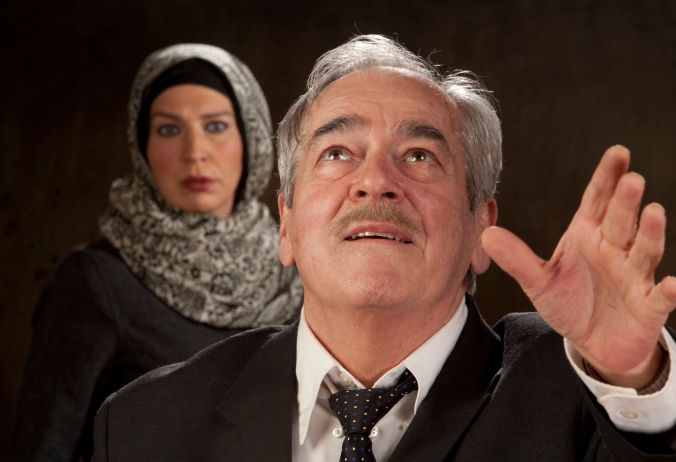 What would you do to protect your life’s work? Your country’s heritage? When does an object stop being a “thing” and become a treasure worth risking your life for? How far will you go to protect the treasures you hold dear?

These are the questions posed by Ghosts in Baghdad, a new script by playwright and Working Spark Theatre founder Michelle Deines. Inspired by a New York Times article by Roger Cohen, Deines’ script centres around the complex decisions faced by Khalil and Malika, two fictional museum directors who continue their work in fear and isolation ten years after the 2003 American invasion and the looting, destruction, and subsequent closure to the public of the Iraq Museum. With thousands of ancient historical and cultural objects still missing and the Museum open only to government officials and foreign diplomats, Khalil walks the empty halls alone, dreaming of the day he can throw open the doors and share his country’s history with its people. Malika, meanwhile, hides away in her office, hunching over a piece of stone tablet she has been translating for over a decade, and while she tries to decide if her affection for country and colleague are enough to keep her in a city still so dangerous and full of sorrow. When a desperate young boy appears claiming to have found the missing Mask of Warka, his arrival threatens to unravel the delicate webs of secrecy and betrayal that have sustained what is left of the damaged Museum.

The Little Mountain Gallery, which houses this production, is a spartan venue that certainly has its difficulties (I’ve performed there myself so I know first hand). Working Spark has done an exceptional job of transforming this space, building a new and larger platform for the actors and bringing in more comfortable multi-level seating for the house. That said, the space has its challenges. The performance I attended was the Thursday-night preview and it was clear, both from director John Murphy’s comments before the show and the slightly tentative energy of the performers onstage, that there were still a couple of kinks to be worked out in the space. Without a conventional “backstage” in the Little Mountain, the transitions between scenes seemed to be a particular challenge for this particular performance. However, I trust these transitions are going more smoothly during the actual run of the play, and also recommend simply choosing the seats in front of the shallow thrust stage (rather on the left or right side) where the “offstage” movements of the actors won’t be as visible.

Still, the actors fill their roles with natural ease and without pretension (Gili Roskies’ performance as the youth Dawood is particularly arresting) and Deines and Murphy made important choices in the writing and direction that support this ease. The actors’ voices are without put-on accents and their dialogue is as casual and full of expression as any other English dialogue. These choices (i.e. the choices NOT to have the actors use accents or speak using phrases or expressions that are different from those we would use in everyday English) are tremendously important in that Working Spark has managed to set a play in Baghdad without casting the characters as “the Other”. Of course there are no special accents–Iraqi people are not “foreign” in their own country. Of course there are no unfamiliar expressions–the expressions used by native Arabic speakers would not sound unfamiliar to other Arabic speakers. The point is not to exoticize Baghdad or to pass any kind of judgement on its culture, before or after the American invasion. The point is that culture is important in itself.

What Ghosts in Baghdad shows us is the way in which society’s treatment of historical, natural, and cultural artifacts is a measure for the condition of its people. When looters storm a national museum and force its closure to the public, they steal not from an enemy force but from themselves. Only extreme circumstances would create that kind of selfishness in most people–circumstances whose immediacy renders centuries and millennia of artistry miniscule. You can’t eat a statue, or live in an ancient vase. An artifact in a display case can’t protect you from bullets and heritage can’t buy your ticket to a safer place. But if money could do these things–and you could find the right buyer–could anyone blame you? Sadly, these treasures once lost are usually lost forever, and a people whose history has been stolen and who are unable to take pride in their collective culture will find it that much more difficult to heal–but what can they do?

In Ghosts in Baghdad these questions are turned back on themselves, as those champions who have sworn to preserve their cultural artifacts struggle to protect them from the desperation of poverty and fear–and also from themselves.

Ghosts in Baghdad plays at the Little Mountain Gallery (Main at 26th Ave.) until Sunday, April 6 (no show Monday, March 31). Tickets can be purchased online through Brown Paper Tickets.

Disclosure: TC and I attended the Thursday-night preview courtesy of Working Spark Theatre. My content is my own.