Just a short post from me this time as the family medical situation that brought me to Toronto last week became, as of Sunday night, a situation which now requires my staying in Ontario to attend my grandfather’s funeral.

There’s not much I can or want to publicly say about this situation, but I did want to say an internet thank you to Air Canada, for being surprisingly human for a large (and oft-maligned) airline.

After spending a week with my family, I was scheduled to fly home on Tuesday on my mom’s Aeroplan points. On Monday morning I found out that my grandfather had passed away during the night and, obviously, if I wanted to attend the funeral (which I did), I would not be able to fly on Tuesday as planned.

With less than 24 hours to go before I was meant to be boarding a plane, Aeroplan cancelled my flight and reimbursed my mom’s Aeroplan points. We were advised to call Air Canada when rebooking my flight home to talk about a possible compassionate discount–as it turns out, if you are suddenly changing or making travel plans so that you can attend the funeral of an immediate family member, Air Canada may be able to offer you a bereavement fare (obviously, when I called I was asked to provide specific details about the funeral so that Air Canada could verify the legitimacy of my request).

The hardest part about the process was actually just waiting on hold with Air Canada to talk to someone (30 minutes!) but once I was put through to an agent I found her to be very helpful. I had already picked the flight I was hoping to be on so once she confirmed that she could get me a bereavement fare on that flight the rest was pretty fast. She didn’t offer any platitudes, which is not what I wanted anyways, but she was courteous and efficient, and double-checked the details at each step before she made any promises. When I hung up the phone I was booked on a flight home for a price that was $100 less than the fare posted online.

$100 may not seem like a huge amount, however, unexpected events often come with unexpected expenses. For an airline not to take as much advantage of a situation as they could (since people travelling for funerals usually don’t have the flexibility that would allow them to arrange their schedules to facilitate cheaper flying), and to actually offer a fare to make things a little easier on their customers’ wallets, feels like an incredibly human thing to do. Air Canada is probably not the only airline to offer compassionate rates, but they really helped me out this time and I certainly appreciate it. 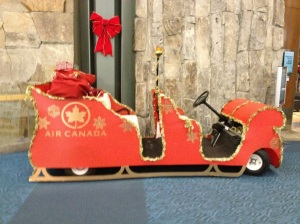 (Yes, it’s a Christmas picture but it’s the only one I have that says “Air Canada” and also “giving”.)