First we gathered at CBC Plaza

If you’ve at all been paying attention to the news lately you probably know that approximately 400 000 people marched through the streets of New York last Sunday to demand that the world and its leaders (125 of whom were meeting this week for a UN summit on climate change) to take meaningful action against climate change. What you may not have known was that this historical event (the largest climate march in history) partnered with marches in more than 130 cities all across the globe, including here in Vancouver. Though I’d received a phone call from the lovely people at leadnow.ca inviting me to take part in the upcoming march, I was feeling overwhelmed by various urgent and not-so-urgent obligations and wasn’t sure I was actually going to attend until I came across an opinion piece by Dr. Lynne Quarmby in the Vancouver Sun that morning (the piece was actually from the previous Friday; I just didn’t see it until Sunday morning). And that settled it. If you’ve ever read my blog, you’ll know that there are a lot of issues I care about. To name a few that I’ve written about at least once: I care about women’s rights and gender equality. I care about marriage equality and the rights of LGBT people. I care about the integrity of our democratic institutions. I care about the arts. 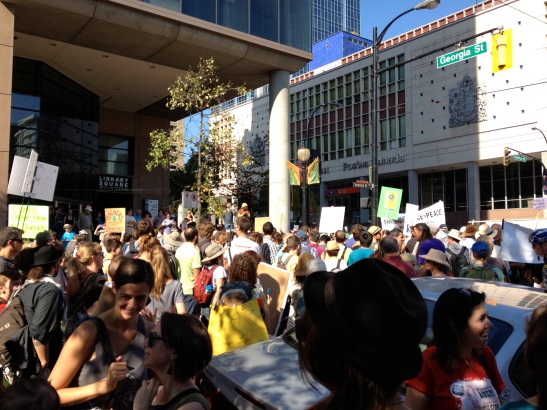 After some speeches, we’re on the move!

Until recently, if you’d asked me if the environment was a top priority of mine I would have said no. Not because I didn’t care about the environment, but because defending it seemed impossible, especially in the face of my own complicity in the causes of climate change (I sure do love using electricity, driving cars, and buying cheap products about whose production I know nothing). I thought, “Why does this have to be my fight? Can’t it be David Suzuki’s fight? I mean, I recycle, don’t I?”. Even though I always knew I was against, for example, the proposed Northern Gateway crude oil pipeline, my reasons at first had more to do with not wanting diluted bitumen sloshing around in my backyard than about the planet as a whole. 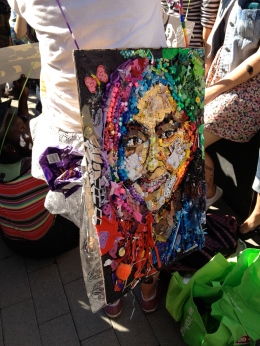 But then I realized that the crisis we are facing is so much bigger than my own backyard. It’s not just that we need to find a less controversial and more democratic way to review and approve energy projects, it’s that the oil actually needs to stay in the ground. It’s not just that Canadian ports have no business shipping the U.S.’s coal overseas (we don’t–we really shouldn’t be helping U.S. companies skirt around new American environmental regulations), it’s that the coal needs to stay in the ground. It’s not just the thousands of jobs in agriculture, aquaculture, and the tourism industry that will be lost if a pipeline leaks  or a tanker spills, it’s the thousands of human lives that have already been lost due to extreme weather events caused by climate change over the past few years. Our selfish actions, and our indifferent attitudes, are killing people.

And you know what else? We’re killing ourselves too. Do you think a drought, or a hurricane, or a flood, or an ice storm, gives a crap that you live in Canada, or work really hard at your job, or are rich, or are devout? Nope. Not at all. We’ve messed with a balance that is pretty important to our survival and now this imbalance is messing with us. We can stop it. But we need to act now. We need to stop being defeatist and thinking there’s nothing we can do. And we need to demand that our politicians stop selling the ground we stand on out from under us.

So that is why I marched. That’s why I chanted and cheered and, once or twice, cried a few tears because hope is so heartbreaking, especially hope in the face of such powerful and insidious forces.

There is no room for dismissing me or my fellow marchers around the world as radicals or foreign agents or whatever the hell Joe Oliver and Stephen Harper and Ezra Levant would have you believe. We are regular people from all walks of life who have read the writing on the wall and know that something needs to be done.

It’s not even about our children’s future anymore. It’s about ours. You don’t need to be an environmentalist or a leftist or a Democrat or a hippie to know that you can’t eat money, or drink investments, or live in a city that’s under water or buried in snow. Common sense (and the consensus of the scientific community) tells us that you can’t essentially burn down your house and still live in it.

There are a lot of things I want to achieve and fight for in my life, but none of that will matter if this fight is not won. I’m trying to save my own home. What’s so radical about that? As my favourite sign from Sunday’s march read, “There is no ‘Planet B'”.

P.S. Maclean’s did a great interview with Naomi Klein that is well worth a read.

2 thoughts on “People’s Climate March Vancouver: I came, I marched, I blogged”