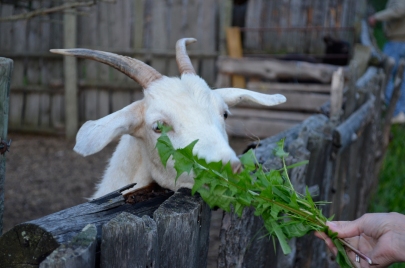 I can’t find any images of children at play…so here is a picture of a goat eating dandelion leaves.

Though not an educator or a parent myself, like most adults (especially those adults who want to have kids sometime) I have Opinions about education and childhood.

I have Opinions about Kids These Days and What Are Teenagers Thinking?! and No One Respects Their Elders Anymore, etc. etc.

So when the idea of year-round school (essentially cutting out summer vacation and replacing it with one to two week holidays dispersed throughout the school year) is floated around, as it was in 2012 when the B.C. government introduced legislation allowing school districts to set their own calendar as long as they meet a specific minimum of teaching days, I have Opinions about that. I’m not for it. (Although there are a handful of B.C. schools that do operate on a year-round calendar, this has not been adopted province-wide or even district-wide anywhere to the best of my knowledge).

When all-day kindergarten was implemented across the board in B.C., I wasn’t for that either. I consider it a Band-Aid solution to the very real challenge of unaffordable childcare in an economic landscape that tends to require two working parents to support even a modest household. I do not agree there is any solid educational basis whatsoever for keeping five-year-old children in a classroom setting for twice as long as they used to be. According to the wisdom of the government, B.C. children were “falling behind” (this is also the government’s position on summer vacations, which is why although they are not forcing districts to adopt year-round schooling they encouraged it). But falling behind whom? Falling behind cultures where children go from morning lessons to school to tutor to night school and live in constant competition with each other and constant fear of disappointing their parents? Is that a lifestyle we really want to emulate? Besides, if all-day kindergarten were truly an educational imperative, kindergarten itself would be mandatory in this province, but it’s not. If you send your kid to kindergarten, you have to send them all day, every day, but if you decide to keep them at home for another year and just plop them into grade one when they’re six, apparently that’s completely okay and there’s no government hand-wringing about how far your kid has “fallen behind”. Can’t see the logic in that. [Note: I am not in any way passing judgement on the quality of kindergarten teaching in this province; I’m sure the teachers and support staff teaching the all-day kindergarten curriculum are absolutely fabulous, but the quality of the education is not the point.]

Children are not little adults. We don’t need to prep them for the labour market just yet. Kids should play. And I’m not talking about “play-based learning” in the classroom or whatever pedagogical buzzwords the Ministry of Education decides to throw around this year. I’m talking about unstructured, totally for fun, (mostly) unsupervised play. I’m talking about two months of swimming at the lake and camping trips and running through sprinklers and building forts and watching your dad stain the deck (and maybe getting to help paint ONE board). I’m talking about fishing grubby change out of grubby pockets and heading with your friends to whatever nearby store sells candy/ice cream (when we were in town that would have been “Susan’s Place”, but at the lake, etc. it would have just been the concession) and playing on rock piles and in the bush.

As it turns out, concerns about limiting kids’ play aren’t just rooted in nostalgia–Maclean’s just ran an excellent interview with injury-prevention expert Mariana Brussoni (June 29, 2015 issue), in which she  discusses research that demonstrates that not allowing children to engage in unstructured, rough-and-tumble play is actually detrimental to children’s health outcomes and social development. Risky outdoor play not only encourages physical activity and makes children familiar with their own physical limits, it also promotes the development of skills like conflict resolution and setting boundaries (which is very important if you want children to be empowered enough to say no to drugs or to practice safe sex). According to Brussoni:

In supervised activities, there’s somebody else guiding the activities; [children] don’t have to set the goals for what they want to do and how they want to engage in it. When they’re out in the neighbourhood [on their own], they’re deciding, “Okay, let’s build a fort. Let’s play prisoner. Let’s play capture the flag.” They’re negotiating back and forth to decide what the rules will be, how it’s going to work, who’s going to do what.

So basically, when we let kids play on their own, we let them develop the skills they’ll need to be adults. Without confining them to a classroom for another three hours every day, or forcing them to sweat it out in school in the middle of July or August instead of being on summer vacation. Huh. I should note that Brussoni was mostly talking about the detrimental effects of “anxiety-based caregiving” as it pertains to parenting and playground infrastructure (which Brussoni says is now too safe and too boring and not as good as a tree or some bushes), but it’s not hard to see how the B.C. government’s positions on all-day kindergarten and year-round schooling are rooted in and play to an anxiety-based methodology of teaching and caregiving. While there are absolutely cases in which some kind of summer programming can be beneficial to kids (children who don’t speak English in the home, for example, may risk losing a lot of newly-acquired English skills over summer break), special cases should not shape childhood experience across the board or indefinitely (once kids who benefit from summer programming acquire the skills they need I’m sure they’d love a summer vacation too), and it’s important to consider what kids lose when we take away their opportunities for play.

Just because play cannot be measured like grades in a report card, that doesn’t mean it is without value. Just because we aren’t keeping children in formal educational settings 24/7, and telling them exactly what they should notice and investigate and pointing their head in the direction we want them to look, that doesn’t mean they aren’t noticing and investigating the world around them. We need to give kids the same chances we enjoyed ourselves (and maybe a little push to take those chances, a push like limiting screen time). Children are naturally curious (that’s why they poke around and ask weird questions I assume). Why can’t we trust them to learn? Do we really think they’re so stupid, so inept, that their lives require elaborate choreography every second of the day? Is a skinned knee or a ripped coat (or even the occasional trip to the hospital for stitches or a broken arm) really such a bad thing if your child is confident, capable, and curious?

I believe in public education, and I know that formal education (especially getting a good grasp of reading, writing, and numeracy) is an incredibly important part of a person’s learning experience. But it should NEVER be confused with the actual act of learning, which is ongoing and unending and absolutely limitless.

One thought on “The “play” is the thing”