Theatre Terrific’s BEING Animal is currently running at the Vancouver Fringe. The final three performances are this Friday (6:00 p.m.), Saturday (2:00 p.m.) and Sunday (2:00 p.m.). 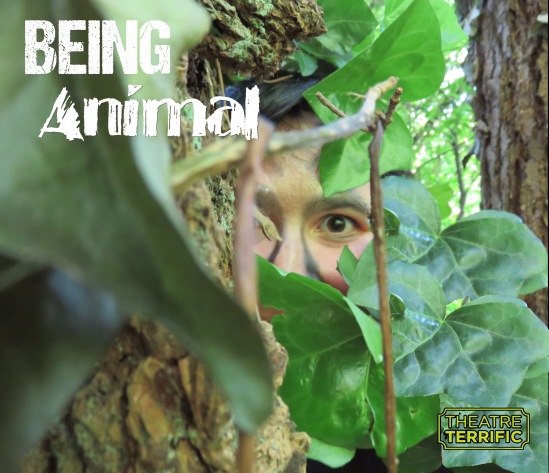 “Humans are tuned for relationship. The eyes, the skin, the tongue, ears and nostril–all are gates where our body receives the nourishment of otherness.”

Inspired by the work of author David Abrams and created by Theatre Terrific’s ensemble (under the directorship of Susanna Uchatius and James Coomber), BEING Animal uses music, mask work, puppetry, and physical stage choreography to explore and help forge our connections to our natural world, and each other.

Theatre Terrific’s inclusive casting and creation practices provide professional theatre opportunities for performers with drive and talent, regardless of physical or cognitive (dis)ability; their resulting productions dissolve prejudices about ability and art, while reaffirming the inherent dignity of the human spirit. But BEING Animal is so much more than a great mandate. It’s a beautiful and immersive theatrical experience. The audience sits along the boardwalk behind Performance Works, the stage is a grove of trees, and the backdrop is a peekaboo view of the sea and the city. The matinee performance I attended was quite windy, but that only added to the other-worldliness of the show, allowing me to feel both a part of the city and outside of it at the same time, both immersed in nature and participating in the distinctly urban experience that is an afternoon at the theatre. With its sparse use of text and reliance on stage picture, physical choreography, and musical cues to move the show forward, watching Being ANIMAL is akin to watching contemporary dance–lulled by James Coomber’s ethereal score, I simply allowed the event to unfold before my eyes, startled from my reverie now and then as a new image or moment settled into recognition.

One of my favourite aspects of this show is its use of masks–I’ve always loved mask work and I find that masks both remove barriers to an audience’s relation with a character, but also accentuate what is particular or idiosyncratic about a performer’s body, turning what some may see as a performance liabilities into unique physical gifts. In masks, individuality is erased, but humanity is accentuated.

As much as BEING Animal uses ideas of “the natural world” thematically, at its core it is startlingly human. It’s not about having an open mind, but about having an open heart–recognizing our shared frailty, our longing for communion (whether with nature or with each other), and our strength. 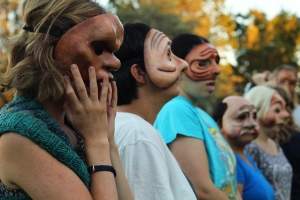 [I don’t want to give too much of the show away but during one specific section both my companion and I were moved to tears–not because the play was sad but simply because the moment we were watching was so beautiful. That’s something I don’t get to say a lot.]

BEING Animal plays at the Vancouver Fringe, in the Sculpture Grove behind Performance Works, from Friday to Sunday (see Fringe website or top of post for performance times). Tickets are $14 (must be accompanied by $5 Fringe membership or valid pass) and can be purchased online at VancouverFringe.com.

Disclosure: I attended last Sunday’s performance of BEING Animal courtesy of Theatre Terrific.