On Friday, the small northern community of La Loche, Saskatchewan was devastated by a school shooting that left four people dead and seven seriously injured. While friends and family members struggle to make sense of this shattering event, while the victims who survived recuperate in hospital, while Brad Wall, Saskatchewan’s premier, pledges the provincial government’s support, while the shooter (a youth whose name cannot be released) awaits his trial, while blame is laid here and there and many see this event as yet another tragic link in a long chain of poverty, violence, and government neglect in First Nations communities in Canada, the one thing I’m sure we can all agree on is that this is not a great time for making racist jokes. 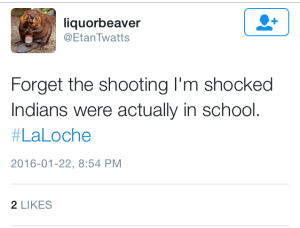 This is an actual tweet from Friday night, as people used the hashtag, “#LaLoche” to send prayers and messages of compassion and support to a community in mourning (I do not follow this tweeter–this tweet came to my attention through another person quoting it in disgust). Now, with a Twitter name like “liquorbeaver” and a handle like “@EtanTwatts”, this guy (I’m assuming, with the puns about licking beaver and eating twats this is a white, hetero-normative male rather than a lesbian woman but I suppose I could be wrong) could definitely be called an Internet “troll”. He clearly likes getting a rise out of people and knew that making fun of a tragedy would be a great way to do it. He must have had a great night, fielding the angry responses from people like me:

In fact, I’m absolutely sure he was loving it: 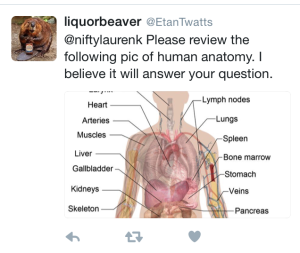 [Note how he calls the shooter a “savage” here–classy!] 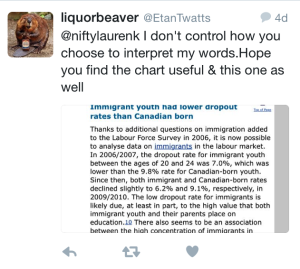 Ah. I see. It’s MY fault for CHOOSING to INTERPRET his making a race-based hurtful comment about First Nations people in response to a school shooting in a First Nations community (in which he literally says, “Forget the shooting”) as racist. Pardonnez-moi. Poor liquorbeaver. He’s not a racist, right? He’s just a poor misunderstood truth-teller!

I should note that the screen shot he attaches here seems to be from a StatsCan report about dropout rates among different Canadian demographics, but since he didn’t actually link to the report I can’t verify its legitimacy. Here’s a closer look at the relevant section: 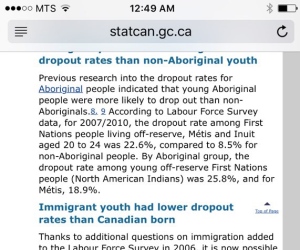 Giving Mr. Beaver the benefit of the doubt (not that he deserves it), let’s assume these statistics are accurate as of the time of whatever report this is. Let’s say the dropout rate among First Nations students aged 20-24 is higher than those of non-Aboriginal Canadians. Okay. Well–firstly, this is a statistic about people aged 20-24, so, this is not a report about typical school-aged children, secondly, a 22.6% dropout rate still means non-dropout rate of 77.4%, which means there are more people still in school than dropping out. Thirdly, there are a lot of complex, systemic, and/or just totally shitty, racist, and unfair reasons that a First Nations (adult) student’s ability to complete their schooling would be negatively impacted, far beyond the struggles most white Canadians experience. Fourthly, this statistic appears to apply to 20-24-year-olds specifically living off-reserve, so it’s really a terribly incomplete picture of the highschool completion rates of First Nations students as a whole. Obviously, the numbers don’t really say what he thinks they do, and liquorbeaver seems to be CHOOSING to INTERPRET them as justification for his bigotry. How unfortunate for the strength of his argument.

But Mr. Beaver’s poor understanding of statistics and his lack of critical thinking skills are not the point. The point is that I don’t think liquorbeaver is just some Internet troll. If he were, he wouldn’t care that I called his joke racist, and he wouldn’t try to justify his racist remarks to me or anybody.

The point is that he thinks it’s OKAY to make a joke about First Nations people in response to a school shooting. The point is that he seems to suggest that the disproportionately high dropout rate among First Nations students (which is generally accepted as fact in Canada although not represented in the report liquorbeaver was using) is somehow a product of their race, rather than, for example, the historical, ongoing, and far reaching disastrous impacts of colonial invasion and colonial extermination and assimilation policies. The point is that he thinks using words like “indian” and “savage” in reference to First Nations people is okay (hint: even when four people HAVEN’T just been murdered, it’s not okay), and that using these terms doesn’t make him racist because he feels he is “right”. And the point is that, at the time I took my first screen shot, two people had “liked” his racist tweet.

Two people isn’t a lot of people. But I know there are a lot of people, in Saskatchewan and the rest of Canada, who saw liquorbeaver’s tweet and secretly agreed. They maybe wouldn’t have been so callous as to retweet or “like” it or to make that joke themselves (at least not so soon after the shooting), but I know there are lots of white people in Canada who would agree with liquorbeaver because I’ve heard them say similar things before. And not just on the Internet. In real life. In public. At parties or at work or at school and even at university. A lot of white people in Canada think it’s perfectly fine to talk about First Nations people this way, as if it’s just “the truth” and isn’t racist. As if it’s not possible to be racist about First Nations people. As if, if they don’t like what white Canadians are saying about them, First Nations Canadians should just stop being so lazy, drunk, uneducated, criminal, promiscuous, or whatever other hurtful label we want to throw on them. I know there are a lot of white people in Canada right now reading about La Loche and tut-tutting about how this is just another example of First Nations people killing First Nations people and they need to sort themselves out and this has nothing to with the rest of us, that we are not implicated in this.

No. Sorry. Not good enough. I’ve had it with this bullshit (and if I’ve had it, I can’t even imagine how fed up and bone-tired and frustrated First Nations people must be). It’s 2016, for pity’s sake, the history is out there for anyone to learn, and we STILL think that people we have actively exploited and killed and neglected and trodden down and dehumanized over centuries should somehow pull themselves up by their bootstraps without us at least getting out of their f*cking way and admitting that the country as a whole has a serious problem? While we continue to use racial slurs and perpetuate racial stereotypes? While we ignore the fact that we benefit from our privilege every single day and that maybe, just maybe, we should try to help balance the scales?

There are a lot of white Canadians who are trying to be more cognizant of and educated about First Nations people and what they experience(d) in Canada, and who are trying to be good allies (I’m trying too). When I was younger I was too scared of my peers and co-workers to speak up when someone said something out of line. It was easier to just ignore it, and quietly find a peer group and profession where these kinds of comments are all but unheard of. But I’m older now. And this is too damn important. I’m a white, middle-class Canadian woman with a university education who experiences privilege in more ways than I’m even aware of. I know I could never understand what First Nations people in Canada have gone through, and I know I didn’t change liquorbeaver’s mind. But simply “not being racist” myself isn’t good enough anymore. I have a responsibility to point out racist shit that isn’t okay. I have a responsibility to let people who make these kinds of horrible “jokes” know that I’m not laughing with them. It’s really actually the very least I can do.