The online ticketing page is up, the press release has been sent out, and the Troika Collective continues rehearsing for our upcoming production of Torsten Buchsteiner’s Nordost (translated by David Tushingham).

After my last dispatch, I received an inquiry as to what a “dramaturg” does. “Is it like an editor?” people sometimes ask. The answer is sort of, and also, it depends. When the dramaturg is a script dramaturg or a new play dramaturg, they will often work with a playwright to bring the playwright’s vision to fruition and prepare the script for production, so yes, it could involve helping a playwright craft a script the way an editor may help an author craft a novel, but not always. So that’s the “sort of” part.

But it depends what kind of dramaturgy we’re talking about. When the dramaturg is a production dramaturg on an already-written play, as I am on Nordost, the dramaturg is there primarily to assist the director with the crafting of their vision. In this role the script is a constant and will not change. In some processes, the dramaturg will supply the director and cast with research materials about the play or the time period or the historical event, etc., but I find I’m not really that kind of dramaturg either. I like to be another set of eyes, generally. I like to attend rehearsals and take notes and occasionally have good-natured fights with directors for or against specific artistic choices. Until recently in this process, we were still blocking out the show (which is very very difficult in the round), so I was making a point of sitting on a different side than the one Aliya, our director, was on, and occasionally pronouncing that I was “seeing a lot of backs of heads”. It’s good to be useful.

Last week we gathered around Aliya’s laptop to watch a video of Nord-Ost, the Russian musical that was being performed in the Dubrovka Theatre when it was taken hostage (the siege itself becoming the premise for this play). Some funny stylistic choices aside (lots of jazz hands), it was rather chilling to think about an audience of nearly 800 watching this play, enjoying the dance numbers and getting involved in the story like any other show, with no idea that a real-life nightmare would begin in the second act. The unsuspecting audience were like passengers on the Titanic, laughing and having a good time while the ship sped towards an iceberg. Like the books the cast has been reading, this slightly sentimental musical will become part of each actor’s internal background, shaping and informing the text as they lift it from the page, bringing it into their voices and bodies.

The weight of the subject matter is always a presence in rehearsals. Levity in the process and jovial interpersonal relations can only take you so far when the words being spoken are so serious and emotionally charged. As a more occasional observer (I don’t attend every rehearsal), it is my privilege to watch these incredible actresses develop this telling of the story, and return to this material again and again, finding nuance and subtlety in rather heavy-handed realities. Both the actors and their characters are finding their resilience, and I know I say the word “exciting” a lot when I talk about this process, but it really really is.

Mark your calendars! Nordost will be performed at the Havana Theatre on Commercial drive March 4 – 7. Tickets can be purchased online at nordost.brownpapertickets.com.

This spring I have the privilege of acting as production dramaturg for the play Nordost, by German playwright Torsten Buchsteiner (translated by David Tushingham). The director, Aliya Griffin, and I are good friends and co-artistic directors of Aliya’s performance society brainchild, The Troika Collective (which is to say these dispatches will be somewhat self-serving since obviously I want to spread the word about this amazing show). 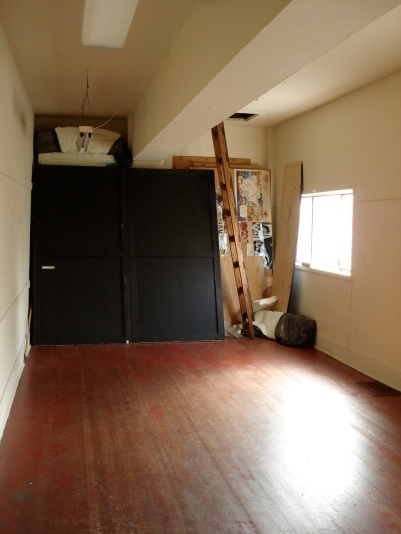 This room is “the skinny”, where the cast was rehearsing yesterday! (This photo is a few years old).

It’s been a couple of years since I’ve been involved in a rehearsal process and I must confess my theatrical muscles have gotten a bit stiff lately. This makes me somewhat wistful, remembering a time when life was pretty much one long loop of rehearsing and performing and I got to move and shout and experiment and collaborate and create with my friends a few times a week (there really was something lost when I decided not to make performing a priority anymore). But it’s kind of invigorating too–waking up old sensibilities, watching the creative process unfold, and having it feel fresh again, rather than being the same old slog (which does happen, as much as I enjoyed performing). I think production dramaturgy is a good fit for me, and a fortunate one–not every director will work with a dramaturg (and some who have dramaturgs foisted on them don’t listen to them anyways). There’s something very attractive about dipping my toes in the process but not getting fully immersed. I get to see something different from what the director and cast are seeing (because they are seeing the everyday of it, and I am seeing more like time-lapses), and that’s kind of special.

But still very daunting. In the past, The Troika Collective has created the work we perform, and you’d think mounting a show that has already been written and performed successfully elsewhere would be easier for us, but it really isn’t. When the challenge of writing a new piece is removed, the challenge of working within textual constraints (and with expectations, if the play is well-known) replaces it. Our production will also be the North American premiere of Nordost, and that is a pretty big responsibility, especially when the subject Nordost tackles is so solemn.

Which brings me to the challenge of content. All plays, no matter their subject matter, should be rehearsed and performed with rigour and intention. That being said, some demand this rigour more than others and we are currently rehearsing a pretty rigourous play. From the perspectives of three different women (a Russian mother of two, a Latvian-born paramedic working in Moscow, and a Chechen widow-turned-militant), Nordost tells the story of the 2002 hostage taking of the Dubrovka Theatre in Moscow by Chechen rebels/freedom fighters, and about the Russian government’s duplicitous and bungled response, which left all of the hostage takers and plus 129 Russian civilians dead by Russian actions. This is a heavy play.

So how do you tell this story in a theatrical space? How do you bring such a terrible event to life in a way that engages, rather than exhausts, your audience? How do theatre artists engage with this material for several hours several days a week without becoming nervous wrecks?

Thankfully, Buchsteiner has written a a great deal of strength and humanity into his characters. There is grief in this story, and anger, but also incredible resilience. In many ways, doing the play justice will mean getting out of the story’s way a bit and letting the audience experience it for themselves. As for the artists working on the show, I feel safety and camaraderie in the rehearsal room and that goes a long way. Rehearsals can still be incredibly pleasant, even fun, in spite of the seriousness of the play being worked on.

There are also formal challenges. Nordost will be performed in the round, which I think is one of the more difficult stage configurations. Unlike a proscenium stage, in which the scenes are really moving pictures in a frame, a round stage offers no place to hide and requires each stage picture to be dynamic and interesting from all angles. It’s a configuration not to be taken on lightly, but when it informs the work (as I think it will), it can be a rewarding artistic choice.

Challenges aside, I am getting pretty excited. Everyone involved directly in the show is an excellent person with commitment and vision and it’s sort of like going on a long road trip with your friends–you know you’re going to get tired sometimes but you know it’s going to be so much fun.

Mark your calendars! Nordost will be performed at the Havana Theatre on Commercial drive March 4 – 7.