On Thursday I decided to put the “international” in the PuSh International Performing Art Festival and take in Welshman Hugh Hughes‘ fantastical theatrical event, “Flo

ating“. “Floating” is produced by Hoipolloi, created and performed by Hugh Hughes and Sioned Rowlands, and presented at the Arts Club New Revue Stage January 20 – February 5.

Using slides, flashcards, flip charts, video, magazines, and other helpful props and pieces of furniture, Hughes and Rowlands tell the not-so-true story of Hughes’s homeland, the Isle of Anglesey, breaking away from the Welsh mainland and going adrift in the Atlantic. The set itself consists mainly of the aforementioned props and visual aides, creating an effect not unlike the way a very large supply closet in a community centre might look.

I believe a hoity-toity description of the night I had would be “meta-theatrical”, in that I never once forgot myself. I did not transcend. I was not “swept away in the magic”. Hughes stressed time and again (using a laminated sign he kept in his pocket) the importance of making a connection with us, and the importance of our decision to come to his show. I suppose it would be hard to truly connect to an audience, as individual people, as members of a group, if our emotions were usurped, if we were stolen away to other lands the way I often am at the cinema or at a different kind of show. Hughes and Rowlands talked to us, gave us props to hold and to pass around, noticed what was happening in the audience (and remarked upon it) and never once forgot we were there, or resided in a stage world that did not include us.

We were included to such an extent that after I was not chosen as the lucky audience member to get to use the “clicker box” to keep track of the story’s episodes, I was invited, in the middle of the show, to help Rowlands clean up the water that had been splashed onstage. I thought I was just being humoured because I’d missed out on holding the clicker box so I said (stupidly), “For real?” and Rowlands replied, “Well, if you come up here it will be real.” So I did. The opportunity to be that much more involved with the show was too good to pass up. I took a towel and helped mop up the stage. When I was done I gave a self-conscious little bow, hopped back down to my seat, and the story continued. It pretty much made my night.

The show is clunky, inviting, funny, generous and enchanting (in a very unmagical, “I can see the strings you’re pulling” sort of way). Yes, the story is a fantasy. Yes, the open structure and the acknowledgment of the audience is good-humoured and gracious and made us all feel warm and fuzzy. I got the sense however that lurking underneath this mythologized episode of Hughes’ life is something very true, and incredibly sad, if only we could stop laughing long enough to realize it. 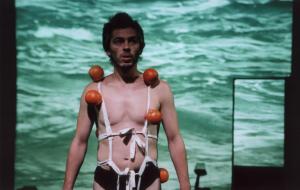 The "harness of oranges"

While I enjoyed the show, and I enjoy the Arts Club as a venue, I do not feel that “Floating” was best served by being presented at the Arts Club Revue Stage. “Floating” is an incredibly intimate and incredibly open piece. The friendly and flexible nature of Hughes and Rowlands is what makes it work. It is not glossy. There are no thousand dollar set pieces or period costuming. I would have loved to see this show in an elementary school basement, or somebody’s garage, or in my living room. I feel this would have been more appropriate to the spirit of the piece, and actually would have enabled me to reach an even higher level of engagement.

There are certain things one expects when they pay $40 to see a show, and certain things one expects when they see a show at the Arts Club. One expects that money has been spent on high-tech effects (like in the Electric Company’s “Tear the Curtain!”), or on a celebrity appearance (like Eric McCormack’s role in “Glengarry Glen Ross”). These productions are impressive and worth every penny but they are distanced from the audience. Another world is being created “onstage” and we are “in our seats” and that is that.

“Floating” asks us to break down that fourth wall and be with Hughes and Rowlands, at heart if not physically, and it is hard to do that when you’re sitting in a structured audience space, feeling a little miffed that you paid $40 for a seat with sight-line issues. On Thursday I also found myself in an audience who did not seem to be, based on the lobby conversation I overheard, “kindred spirits” in terms of the art they enjoy (compared to what I find engaging) and I felt that some of the laughter during “Floating” was patronizing amusement (“Tee hee, what a funny Welshman. What IS he doing?”) rather than actual pleasure. This barred me from the sad truth that I felt was in the piece somewhere, that I wanted so desperately to find, and I believe this kept the audience from being able to make the true connection Hughes tries to emphasize with his work.

I also think that the audience that would be most appreciative of a special piece like “Floating” are those who are turned off by “fancy” theatre and special effects and just want to be in a room with a performance. This type of audience is the least likely to realize that there is a show they should see at the Arts Club, and probably less likely to be able to afford a $40 ticket.

I am not trying to denigrate the Arts Club (or its subscribing audience) in any way. I have seen very good work on the Arts Club stages (“The Black Rider”, “Tear the Curtain!”, “The 39 Steps” to name a few). But these are special treats for me. I choose each show carefully and have always been rewarded by high-tech wizardry, elaborate sets, great music and/or almost impossible physicality. I understand where the extra money goes (to put it in perspective I seldom pay more than $20 for a ticket to anything at any other venue–there were meant to be $25 tickets for this show but those were no longer available when I bought mine). I attend Arts Club productions I am very interested in when I can afford it and I have never been sorry. I am afraid, however, that the choice of venue (and the ticket price that goes with it) for this particular show will keep away the audience that would have appreciated it most of all.

Which is one of the reasons I felt it was important to write this review. For those of you who don’t frequent Arts Club productions, now is the time. Do not be put off by the fancy lobby or the ticket price. Go see “Floating”. It’s the type of art I’ve always wanted to make. It’s the type of art you should see at least once. You have until February 5.