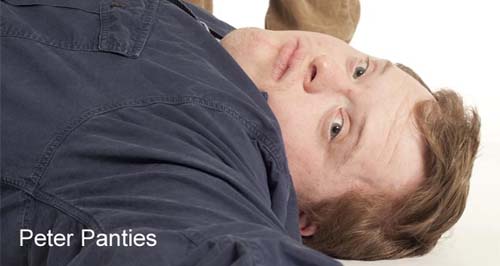 I’ve been a Peter Pan devotee all my life. I’ve seen the musical, own the Disney film as well as a live-action one, I cry every time I read the book. It makes sense, therefore, that I was very jazzed to be wrapping up my 2011 PuSh Festival experience with “Peter Panties” at the Cultch on Saturday. “Peter Panties”, written by Niall McNeil with Marcus Youssef, is a Neworld Theatre and Leaky Heaven Circus co-production, directed by Steven Hill and Lois Anderson, with original music by the fabulous Veda Hille. It will be performed on the Cultch’s Historic Theatre stage until February 13.

Before the show I ran into Marcus Youssef in the lobby. I’d met him very briefly last spring after “Ali & Ali 7” so I reintroduced myself and expressed my enthusiasm for attending a Peter Pan-based play. Youssef was glad I was excited but warned me that “Peter Panties” would be an almost unrecognizable version of the story.

I appreciate the warning but I think Youssef is wrong. No, J.M. Barrie’s classic tale of the boy who refuses to grow up does not traditionally include rock ballads, CSI investigations, or Macbeth. But any die-hard Peter Pan fans in the audience would immediately recognize all the important landmarks of the story: the nursery window, Mr. Darling’s job at the bank, Skull rock, Tinkerbell’s jealousy, Hook’s abduction of Wendy, the crushingly sweet moment before innocence is lost. These landmarks may not be “in order”, they may be expanded and exploded, but they are all there. Like the Never Land, anyone who truly understands and loves the story of Peter Pan can find it in McNeil’s version.

The playwright, Niall McNeil, has Down’s Syndrome. This fact is not hidden nor overly advertised. Video footage of McNeil and Youssef’s writing process (shown at various moments in the piece) reveals a deep commitment to expressing McNeil’s version of the play. Nothing I saw or heard that evening seemed cleaned up  or doctored in any way. And the result is totally unpredictable but very funny and always beautiful.

Watching the piece feels like watching children at play. Certain scenes seem distracted. Certain scenes are confusing. Characters move from snippets of this and that, certain lines sound like something a child overheard at the table or on TV. Like a children’s game, the characters are moved by their own strange logic, unfathomable to observers but incredibly important to those in the game. It’s funny for us but deadly deadly serious for them.

The piece puts the “panties” in “Peter Panties” by  moving beyond the simple idea of the boy who won’t grow up to the notion of the way children think about sexuality. They are curious about it, and Peter and Wendy (played by James Long and Sasa Brown) demonstrate a very clean but inventive way to make a family, but sex is not understood in this play, or seen. To understand sex Peter would have to grow up. And in “Peter Panties” it’s not simply that he won’t, it seems he can’t.

Given the constant exploration of the tension that exists in the middle ground between childhood and being an adult,  “Peter Panties” is more true to the original and beloved tale than people realize, or perhaps more than they’re willing to admit. As a worshiper of the J.M. Barrie text, I have no problem adding “Peter Panties” to the shrine.

Props also go to the Bank Dogs and Veda Hille. If there are copies of the “Peter Panties” soundtrack out there I’d love to get my hands on one…any song that dismisses the idea of growing up with the line “F— that, NO MUSTACHE” is my kind of music.

To read more about “Peter Panties”, I recommend checking out Plank Magazine‘s review by Maryse Zeidler as well as Colin Thomas’s review in the Georgia Straight.

If my stellar blogging has managed to convince you to see the show, “Peter Panties” runs at the Cultch until February 13. Tickets can be purchased online from the Cultch or by telephone through the Cultch’s box office at 604-251-1363.