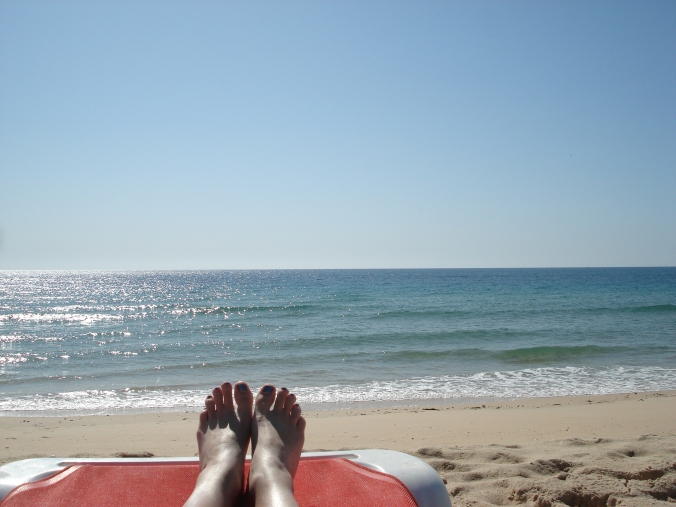 Since arriving in Portugal I don’t think I have seen a single cloud. Not one. This made it a very good idea to make Faro my last stop in Portugal. I’d heard about the long stretches of sand on the little islands that help make up the Parque Natural da Ria Formosa, and I thought Faro sounded like the perfect place to slow down, hit the beach, relax, and maybe take a dip in the Atlantic.

Lagos, farther west of Faro but still in the Algarve region, is probably the most famous (and most touristy) of Portugal’s southern beach cities. From conversations I had at the hostel in Lisbon, and my own research, it sounded like by skipping Lagos I skipped a whole lot of beach, a whole lot of resort feel, and a whole lot of party. Fine by me. If I wanted only to drink and get a tan I’d go to an all-inclusive somewhere.

Despite being definitely more touristy than, say, Guarda, Faro does retain some Portuguese character. When I arrived yesterday I was mostly interested in the logistics of checking into my hostel and looking into boat trips to the Ilha Deserta for the next day, and had only the late afternoon for seeing the city itself, but what I saw of Faro’s centre was absolutely charming.

First stop, as usual, was Faro’s Se, which probably contained more gold paint than I have ever seen anywhere in my life. Best was probably the trip to the roof, which allows you a view of Old Faro’s rooftops, as well as a clear view out to the sea.

In order to get out of the afternoon heat, I then made a quick trip to Faro’s Museu Municipal, where I discovered the work of two contemporary Portuguese artists: Rosario da Silva and Faro artist Carlos Filipe Porfirio. I found their work colourful and whimsical, and, in the case of Porfirio, containing quite a bit of mystery. I didn’t really plan to see any contemporary art while in Portugal but I am quite glad I did.

Wednesday I awoke bright and early and after the usual spartan hostel breakfast I headed down to the pier to catch a ferry to the Ilha Deserta to spend the day.

By “deserta” they really do mean deserted. This little ilha is nothing but a narrow strip of soft white and coral-coloured sand. The north side has a pier, the middle has scrub bushes and a restaurant (with a WC–very important), and the south side has beach. That’s it. Beach. As far as the eye can see. It was beautiful. I kept giggling to myself because I really couldn’t believe my good luck, to be wiggling my toes in warm water and soft sand, and staring across a turquoise Atlantic. What a day!

I shelled out the 7€ to rent a sunbed from the restaurant for the day, and spent the next five hours lying in the sun, with a couple of dips into the beautifully clear, refreshing, and especially salty sea.

My big mistake was assuming, for some reason, that the sun in October would be at such an angle that I would not be sunburned, since I’d been wandering all over Portugal for a week and hadn’t been burned yet. MISTAKE. BIG BAD MISTAKE. I used sunscreen very sparingly that day, only on my nose and cheeks and the back of my neck really, and you can tell, because everything else is an angry red. In short, I have one of the worst sunburns of my adult life. I have now purchased a brand new bottle of sunscreen, which I am usin

g LIBERALLY while I try to appease my poor burny skin.

Sunburn aside, I had one of the most relaxing days I’ve had in a long time. It’s amazing how much you can enjoy yourself on the beach when you’ve literally nothing to do but lie on a sunbed, cool yourself in the sea, and gaze at the sumptious view.

My day on the Ilha Deserta was a perfect way to end my time in Portugal. While it pains me (quite literally, at the moment) to say good-bye, new adventures await across the border to the east, and it is time to say adeus, Portugal, and obrigada, and greet my next destination with a hearty ¡Hola, Espana!