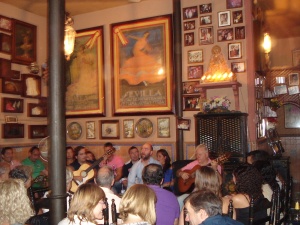 When I arrived at my Seville hostel on Thursday afternoon, it was so hot (35 degrees!) that I decided not to do anything with myself until the evening (good call). I signed up for a little tapas and Flamenco tour being offered through the hostel and figured it would be a nice way to make something of my first evening in Seville and to meet people in my hostel.

Check and check. Seville is a tapas town, and although that evening was unfortunately the only time I actually “did the tapas thing” during my time there, I enjoyed my sangria and beer, as well as the two tapas I ordered (fried vegetables and, much to my eternal delight, fried camembert). The Flamenco was, unfortunately, fleeting. When we all packed ourselves into the tiny bar it was pretty obvious that it would be soley a Flamenco music show, as there was no space for any dancing. I knew I was too tired to last until the show ended at 3 am so I stood near the door (and the tiny bit of breeze that was wafting in) and prepared to enjoy the music.

I certainly did enjoy the music. The three musicians (two guitaristists and a man playing a drum) played and sang with love and their ability to project their voices in such a packed and acoustically poor space was incredible. I have no idea what they were singing about but their music provoked a longing feeling I often get when I listen to something that sounds beautiful and powerful and sad, even if I don’t understand the language.

What the tapas and Flamenco tour leader forgot to tell us, and what made my Flamenco experience “fleeting”, is that the owner of the bar would require us to buy a drink to be able to remain in the bar. That actually makes a lot of sense, but since I didn’t know, and since I was sort of standing all squished in at the back, I didn’t really feel like ordering a drink when she came by, so she kicked me out of the flamenco bar.

That’s right. I, Lauren Kresowaty, who has never been kicked out of anywhere in her life, was kicked out of a Sevillian Flamenco bar. Oh well. I tell myself I was about to leave soon anyways, and at least two of the girls standing near me ended up in the same predicament so we were all able to walk back to the hostel together (which was on the other side of the river). Absolutely sumptious raspberry gelato, which I found at a gelato bar still open after midnight, made everything better.

I only officially visited two tourist sites while in Seville. On Friday, I went to the Seville’s cathedral, and on Saturday, I visited the Real Alcazar, a huge palace and garden complex (sometimes referred to Seville’s answer to the Alhambra). 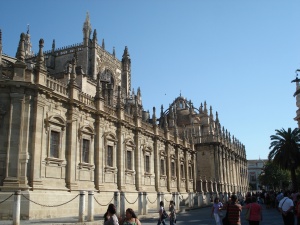 Perhaps the fact that I have visited so many cathedrals already coloured my feelings about Seville’s, but I feel that for an admission fee of 7,50€ (compared to other cathedrals so far which charged about 3€), something really ought to be pretty cool. Seville’s cathedral is impressive because it is very VERY big, and very rich. It also houses the remains of Christopher Columbus (although there are still many reasons to believe his remains are actually still in the Dominican somewhere).  For me, the most interesting part was the tower of the cathedral, which is actually a minaret left from on earlier mosque that had been on the same site. If you like cathedrals and haven’t already gotten sick of them, I think you may really enjoy Seville’s. If, however, cathedrals don’t really float your boat and/or you’ve already seen so many that it doesn’t impress you anymore, you may wish to take pictures of the impressive outside and give paying the 7,50€ admission fee a miss.

Another aspect of the cathedral you should also pass on are the women outside who will try to give you “rosemary” and read your palm. I unfortunately fell prey to this one and before I knew what was happening I had some green sprigs in my hand and was being told I’d have two children, and also that Santa Maria would now like me to give this woman 5€. I wasn’t into a confrontation so I gave her the 3€ that were in my pocket, but I wasn’t too happy about it. The fortune she told me was quite nice but I don’t trust her palmistry any more than her horticultural skills–the “rosemary” in my hand did not look or smell like rosemary, and I’m quite certain that it was just a clipping from a nearby hedge. 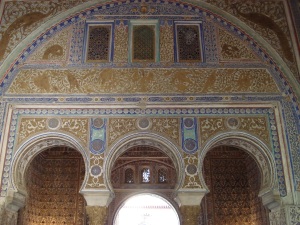 Saturday’s visit to the Real Alcazar was another slightly pricey affair but much more worth it to me. The palace complex is so large that even though I spent two hours within I don’t think I saw everything there was to see. My favourite parts were probably the Mudejar Palace (the section featuring the beautiful Islamic architecture) and the huge gardens. The gardens were complete with fountains, benches, a hedge maze, and peacocks. In fact, the gardens were so big that I almost forgot I was in the middle of a city. I guess it just goes to show that anyone can have the tranquility of country living in the city provided they have enough money and space.

It turns out that because the Alcazar gardens are so beautiful, it is a favourite spot for wedding photos in Seville. I saw five or six different newlywed couples wandering around the Alcazar, being followed by a photographer. I don’t think I’ve ever seen so many brides in one day. It was kind of exciting to see so many people celebrating a special day in one place.

Aside from the major landmarks, the thing I actually loved most about Seville was the atmosphere. Although the city was almost intolerably hot (and therefore completely quiet) during the siesta hours, its evening life more than made up for it. As I was wandering through the streets at around 9 pm on a warm Friday evening, I found the city incredibly active, but also not at all busy. People were drinking and eating tapas in restaurants. Families were bringing their children into the squares and the kids were all over the place, skateboarding, playing on scooters, and chasing one another. While I was eating dinner in the Plaza Encarnacion, I watched a little boy practice kicking his soccer ball, completely intent on getting it over a concrete retaining wall and heedless of the passers by. I absorbed the activity all around me but still felt relaxed and centred as I enjoyed a beer with dinner.

On Saturday night the square became even more active as the Occupy Wall Street movement found its way to Seville. I watched from the roof of the hostel as hundreds of people poured into the Plaza Encarnacion, dancing, drumming, blowing whistles, waving signs, cheering, singing. People at home asked me what the police presence was at the protest but as far as I can tell there wasn’t any. Occupy Seville was a completely positive experience, with families present and venders selling roasted nuts to the protesters.

And truly, what else is there to talk about on a warm night in Seville? Warm hearts and warm-blooded passion are all over the city and it was such a priviledge to stop trying to be such a rush-rush tourist for three days and simply drink it in.