Boo: Waking up in Granada on Thursday morning and throwing up all the lovely Moroccan food I ate the night before.

Yay: Making it on time to the train station anyways and having a solid nap on the train.

Boo: Having to wait an hour and a half at the hostel before my friends from Canada (whose paths I was crossing in Madrid) arrive.

Yay: Meeting a man named Ricardo in the hostel lounge who speaks only Spanish and French and actually using my French to have a half-hour conversation with him, albeit a very limited one. (“Ne sont pas cher!” I exclaim as we look at his souvenirs, because I can’t remember the word for cheap. “Magnifique!”).

Boo: Still feeling too nauseaus to really eat dinner or enjoy walking around the city with my friends.

Yay: Eating dinner and walking around the city with my friends. It’s nice to have them there.

Boo: Waking up on Friday and throwing up again.

Yay: Free and very bland hostel breakfast that makes me feel much better.

Boo: The Spanish Civil War. It was very bloody and lots of people died on both sides.

Yay: Informative, educational, and enjoyable Spanish Civil War walking tour. Did you know that Madrid was the first city to be blitzed (that’s right, the Nazis tried out blitzing in Madrid BEFORE WWII)? You do now!

Boo: Madrid’s glaring lack of monuments to the Republican (i.e. non-fascist) victims of the Spanish Civil War (not surprising given the decades of Franco rule that followed, ending only with his natural death). 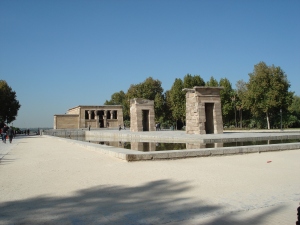 Yay: The Egyptian Temple Debod, which is full of cool things like heiroglyphics. It is the only Egyptian monument to be gifted to a European country (as in, all that stuff in the British museums is STOLEN!), for Spain’s help in preserving Egyptian monuments during the building of the Aswan Dam.

Also Yay: Ice cream and row boats on the large pond in the Parque Buen Retiro. Also yay to singing Canadian sea shanties while rowing (such as “Farewell to Nova Scotia” and “I’se the B’y”) and my friend Kayleigh’s siren song, performed while lounging siren-like at the prow: “Come to me boys/ Come into my lair/ I love you so much/ La la la la la!/ These rocks aren’t very sharp at all/ They’re actually very rounded/ La la la laaa!”

Boo: Still not feeling up for drinking while on tapas/Flamenco tour.

Yay: Having a great assortment of tapas (with chorizo and goat cheese and potatoes with garlic sauce and fried hollandaise balls) at a nice bar while on tapas tour, and then moving on to a Flamenco show.

Boo: Pillar that blocks my view at Flamenco bar.

Yay: Actually seeing a Flamenco show and NOT getting kicked out, and seeing a show with dancing this time! Feel the fire! Feel the passion! Let’s just say if everyone behaved the way these people dance all the time, the streets would be red with blood. Epic.

All in all, Friday was a great day in Madrid. And then, just as I am laying myself down to sleep……

Yay: Checking out the very next morning (after checking my pjs for more bugs and finding none) and heading out to spend the next two nights in the Holiday Inn Express – Alcobenda. Luxury!

Boo: Me being too careless to write down the actual address of the Holiday Inn, or drawing us a map, or anything. Showing up at the metro station in Madrid’s equivalent of industrial South Burnaby with no idea where you’re going is silly indeed.

Yay: Helpful taxi driver who saw us wandering around being lost. He goes into a gas station, gets directions to the hotel, and takes us there. Gracias, senor!

Boo: LONG metro ride back the centre which means we will need to take an expensive cab back after Saturday night dancing.

Boo: The destruction of Guernica and death of its citizens during the Spanish Civil War.

Yay: Picasso’s “Guernica” (it’s huge) and the preparatory sketches also on display at the Reina Sofia. The piece is full of movement and grief and, in comparison to some of his sketches, surprisingly subdued. He was searching for exactly the eyes, hands, tongue, etc. that would best show the horror of that night, and the exploration next to the final painting is very interesting.

Boo: Paying 20 euro admission at Club Kapital, where they throw away not only my water and juice at the door, but also my baguette, for some reason.

Yay: Dancing in a massive club in Madrid on a Saturday night, a club so big and crazy it has exotic dancers on a stage and a sound and light show that rates about as epic as a “Pirates of the Caribbean” film, and silver confetti, and seven floors, AND some kind of crazy machine that blasts the dance floor with ice cold air every once in a while that makes you think the world is ending but completely rejuvenates you for more dancing!

Boo: Realizing on Sunday that my shins hurt and I’m tired of walking.

Yay: Riding the Teleferic cable car over the city! Wheeeeeeeee!

Yay: Getting to spend a lot of time indoors at the Prado (fine art gallery) where I enjoy the Titians and Goyas but mostly the painting known as “The Garden of Earthly Delights” by Bosch.

Boo: Final night in the awesome comfort that is the Holiday Inn and having to say good-bye to my friends while we continue our separate journeys.

2 thoughts on “Madrid: A Tale of Boos and Yays!”