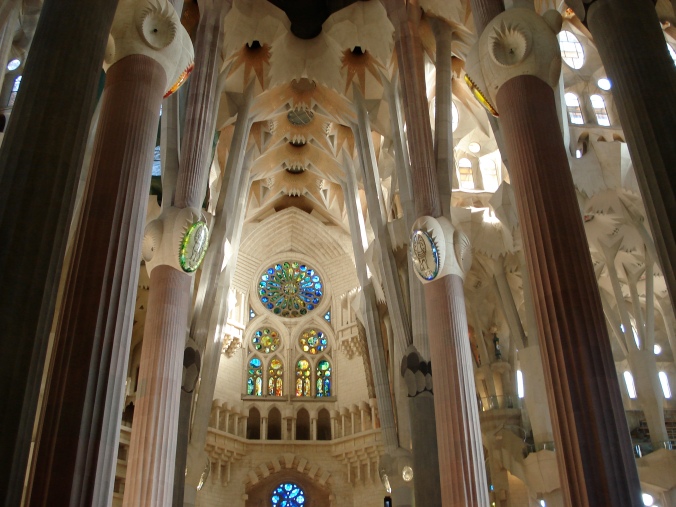 It’s a cliche phrase I know I’ve heard somewhere before and I was hesitant to use it. And then I thought, what the hell, it’s cliche because it’s true. Barcelona is beautiful. This is what struck me about the city. It’s actually a bit small, a bit crowded, a bit touristy, but my god, it is beautiful. Emerge from the Metro–beauty. Duck into an alley–beauty. Turn a corner–beauty. And that’s when you’re not even looking for it, so imagine the gob-smacking beauty you encounter when you actually make the effort to go to a park or a touristy site.

My relationship with Barcelona began as anything but beautiful. When I climbed out of the Liceu metro station onto La Rambla it was pouring rain. This rain became even harder once I checked into my hostel (located most conveniently right in Placa Reial, though I was too dejected at the time to notice). I knew it would be a bit hard to return to a hostel after my two nights at the Holiday Inn in Madrid, but I was unprepared for how hard I’d actually take it. The internet in the hostel was expensive. The hostel was a party hostel and all I could hear when I checked in, tired and hungry, was noise noise noise. The hostel didn’t rent towels, just sold them for 10 euros. My trip almost over, there was no way I was going to spend 10 euros for a giant towel I didn’t have the room to bring home again, so I was forced for four days to dry myself with the Doctor Who facecloth I had bought as a souvenir in London (it has a picture of a Tardis on it, and, Tardis-like, there was more to this tiny flannel than met the eye because it actually did not half badly). And to top it all off, I couldn’t even escape the noisy stupid no-towel hostel, because outside it was raining and thundering and being as miserable as I felt.

Basically, at that moment, I was emotionally done with my trip. I didn’t want to spend five more nights in Barcelona, I wanted to go home. To hell with the Sagrada Familia and the pretty streets. I wanted my kitchen and my bed and my glorious bathroom filled with glorious towels.

Luckily for me, all storms pass over and my emotional one subsided as soon as I met some people from my room, ate a decent dinner, and spent the better part of the evening discussing the finer points of Harry Potter with an Australian and a Brit (note: Dobby would win in a cage fight against Dumbledore). Fun fact: the Brit is a boom operator on Coronation Street! Wow!

On Tuesday morning the sun came out and I am sure glad I didn’t say to hell with the Sagrada Familia because it is the most beautiful building I have ever seen. From the outside it looked pretty cool, I mean, I’d certainly never seen a church before that replaced gargoyles with giant lizards, but it is also still under construction and cranes and scaffolding sort of take away from the general splendor. Waiting in line, I was impressed but wasn’t really sure what the church’s insides would hold. 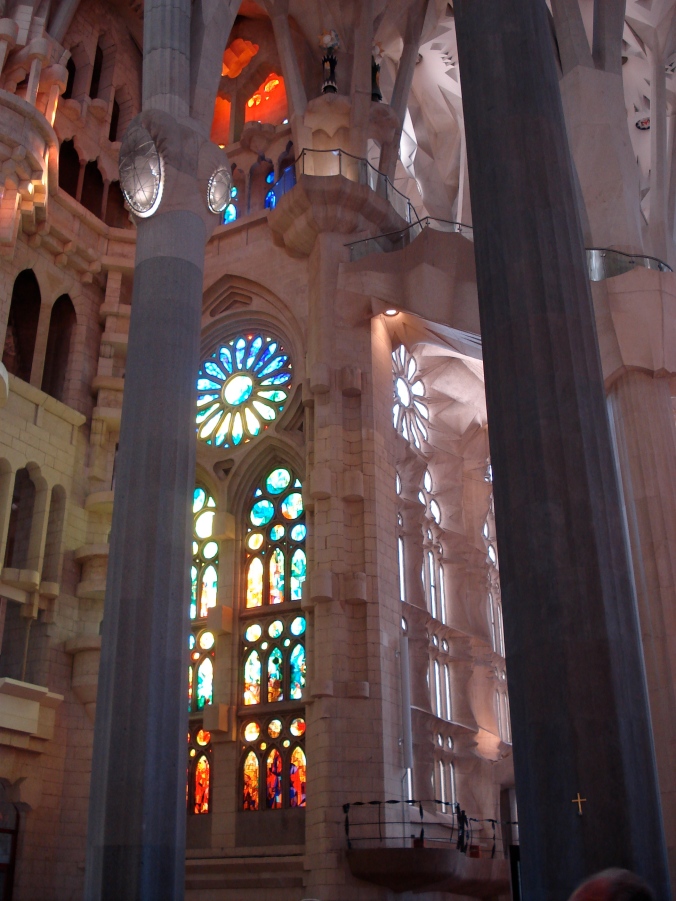 Beauty. Exquisite, unconventional, organic beauty. The Alhambra was beautiful, but the Alhambra is heavy and saturated with luxury and tradition. The inside of the Sagrada Familia is a surprising forest of pillars and light. It is open, it is airy, and it is incredibly incredibly joyful. Even the crucified Christ is suspended beneath a circus-like tent hung with grapes made of glass, and bathed in so much natural sunlight that it makes his predicament seem, again, joyful. Each angle inside the church reveals a whole new sense of wonder. The architect, Antoni Gaudi, carefully studied natural supportive structures formed by mineral crystals and plant growth in order to create his designs, and it shows. The Sagrada Familia does not feel built, or human-made. It feels like it grew. I met people in my travels who saw the Alhambra and were unaffected, but I have not met one person who has seen the inside of the Sagrada Familia whose eyes do not light up when retelling the experience.

I soaked up every bit of the church that I could, visiting all of the museum areas (highly recommended, especially the exhibit relating to Gaudi and nature) and taking the lift into the towers. I decided that after my Gaudi morning I wouldn’t mind a Gaudi afternoon so I made a point of visiting Barcelona’s Park Guell, a park designed by Gaudi whose gates are flanked by two Hansel-and-Gretel style houses. It is an interesting and very pretty park (and free!), and I was pretty much obsessed with everything Gaudi at this point, but the place was crawling with tourists and illegal souvenir vendors and after the devout and tranquil beauty of the Sagrada Familia it was a bit anti-climactic.

The Sagrada Familia and the Park Guell were my only real goals for Barcelona, so on Wednesday I made loose plans for myself (the best kind of plans when travelling) and basically wandered around all day loosely achieving them. I wanted to check out the beaches of La Barceloneta so I wandered down there and did that. Kneeling on the shore to touch the Atlantic a giant wave came and soaked my sandals so I was forced to sit on a beach chair and read in the sun for half an hour while they dried off (poor me!). Got lost and wandered around some more, ate a doughnut, bought some fruits and vegetables at La Boqueria (St. Joseph’s Market) just off La Rambla. Ate a muffin and read a TIME magazine.

Wednesday afternoon: visit the Parc de la Ciutadella. Lovely fountain. Inexplicable giant statue of a woolly mammoth. Another pond with rowboats. Ducks. And then, music. Two guitarists sitting under a tree playing extremely well. Someone on the grass saw me watching and waved me over. When they found out I could sing I was brought to the guitarists and we had a magical musical hour or so. We sang the Beatles. We sang Bob Dylan. We jammed (vocal improvisations on my part…not my finest moment probably but I did my best). I think our best numbers were “I Will Survive” and “Eye of the Tiger” with amazing guitar solos courtesy of Pedro, a Venezuelan who moved to Barcelona ten years ago and was, the day I met him, on day four of being sober and delighted to discover he could play the guitar without alcohol. While I couldn’t quite shake my self-conscious caution throughout our jam session (I never took off my backpack) and insisted on excusing myself as soon as it began to get dark, jamming with these open-hearted musicians, total strangers to me, was a new and wonderful experience. If you know me you’ll know that while I am loud and talkative with those I know, I’m actually a little frightened of those I don’t. Opening myself up and being brave is actually something I’m a little bit proud of.

I knew that Thursday would be rainy so instead of spending it in the hostel or tramping around Barcelona pretending not to mind being wet and cold, I took the train to nearby Figures to see the Teatre-Museu Dali, the museum Salvador Dali built in his home town. My two-hour train ride also gave me lovely views of the interesting (and old-looking) city of Girona, which I would love to explore sometime.

I am a fan of Salvador Dali’s paintings and jewellery and I enjoyed those displayed in the museum (for example, I was surprised, though I shouldn’t have been, to realize that “Atomic Leda” is obviously a painting of Dali’s wife, Gala, with whom he was artistically obsessed). I am not sure I like the museum itself. Housed in Figueres’ old theatre, the passages between the rooms were narrow and crowded and many of the spaces seemed cluttered and full of installation-type art that felt….junky. As if you hung Dali’s paintings in a gallery space and then you had your tacky “artsy” grandmother fill the rest of the space with old brocade, velour, and stuff she found in her garage.

Do I think my trip to Figueres was a waste? Nope. If I hadn’t gone I would have wished that I had. Besides, captivating art is captivating art no matter how you feel about its surroundings. (By the by, Figueres also has a Toy Museum, which, if you’re looking for something to tack onto your day in the city, is a cute, and kind of creepy, attraction.)

Friday was my last full day in Barcelona and I decided to check out of my loud crowded party hostel and check into the super pricey Hotel B, just off the Placa Espanya (right near a stop for the airport bus) for my last night. Before I did that, though, I visited the beautiful Santa Maria del Mar church. I sat in a pew and stared at the stained glass oriel window above the altar for a long time and thought many thoughts. I thought about the past year and those I have lost. I hoped that wherever they are, if they are anywhere, that they have peace. I thought about the people I know who are struggling with difficult circumstances and I hoped that those things would get better. I thought about the trip I had taken, and how lucky I was that I had the opportunity to travel for a month on my own, how lucky I was that I had been safe and, for the most part, my plans had worked, and how lucky I was that I was going to return the next day to the people who loved me.

I do not practice any faith. But I do like a nice, quiet place to reflect once in a while and an old Barcelona church did the job nicely. After four weeks of constant movement to return to a point of internal stillness and contemplation helped prepare me to say good-bye to my adventure, good-bye to the beautiful city that had been so good to me, and say hello to my old life as the new person I have become, a person who is older now, more independent, less anxious, and has more beguiling images stuffed in her memories than anyone should be allowed to have.

So until we meet again, my beautiful bewitching Barcelona, gracias. Thank you so very much.