[I should probably mention that in this post Eazy-E is a rabbit, not the deceased N.W.A. Godfather of Gangsta Rap.]

Once upon a time, Eazy-E the rabbit lived in a children’s summer camp in Kincardine, Ontario with a bunch of other rabbits who were all named after rappers. At the end of the summer, my TC (who used to work at the summer camp) took Eazy-E home with him because he is the Best Bunny.

Just look at him.

My TC had Eazy-E for a few years before I met him, but when I moved into the household, he became known simply as Bunny (the rabbit, not TC). Bunny needs no other name. As TC says, “He’s good at being a bunny.”

And he is. I say again, just LOOK at him! 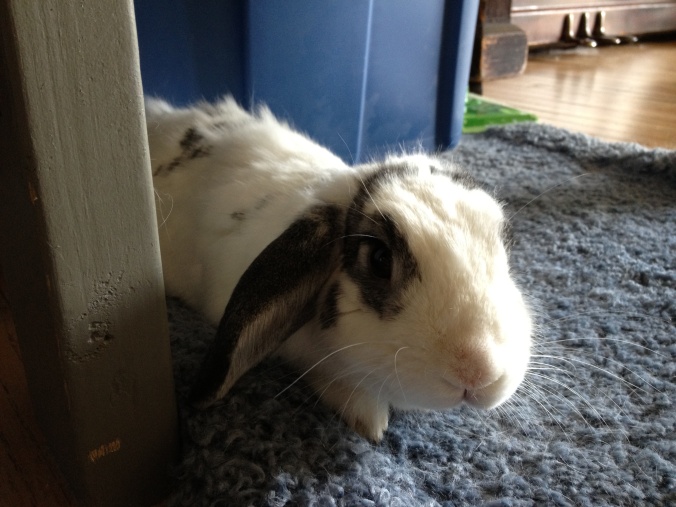 Could anything be more adorable than a rabbit hopping around the apartment, eating our apple cores, yawning, and cleaning his little face with his little paws? No. Nothing is cuter.

In addition to his aforementioned cuteness, Bunny is also a good bunny because he is litter trained. Did you know you can litter train a rabbit? I sure didn’t. This means that Bunny gets to live a “free range” lifestyle. Apart from the fact that he tries to eat electrical cords (which is dangerous for him), I think the life of a free range rabbit is far superior to that of his hutch-dwelling comrades. For one thing, Bunny can have adventures under the couch eating my Maclean’s magazines, and also, he can hop onto our bed and headbutt us in the morning so that we’ll give him treats. If you’ve never been headbutted by a rabbit you should be. It’s magical.

When you read about Bunny eating my magazines and chewing on our electrical cords and headbutting us, you may think that perhaps the bunny is a bit of an asshole. And you would be exactly right. Our bunny is an asshole and it’s all part of his charm. What use is a pet that gives you unconditional love and doesn’t occasionally make weird growly noises at you from under the coffee table? What use is a pet that DIDN’T eat your degree transcript and the cover of several books and part of the new waterproof bag you just bought (rendering it completely not waterproof at all)? Very little use in our household, partner.

The thing is–our bunny is the essential Bad Boy. He’s aloof. He’s elusive. He takes your love (and your yoghurt treats and your carrot ends and the assignment you’re working on) and runs away with it leaving you with nothing but rabbit hair on your clothes. He chews on your drywall and one time he bit you on the hand because you wouldn’t pet him (because you were asleep). But he is just so damn small and soft, and he does such a sweet “electric bunny dance” that you can’t help adoring him. “Bunny,” you say, “I love you.” And he replies, “Yeah baby, I know it.” Cheeky bastard. You deserve a pet that’s more appreciative.

And yet–and yet–you can’t help hoping that one day, one day if you give him treats and bits of spinach and don’t startle him too often, One Day maybe the Bunny will love you as much you love him. He won’t, but I keep trying. Because that’s just how love is sometimes.

[In case you couldn’t tell, this is my “Easter” post. Have a great holiday everybody!]