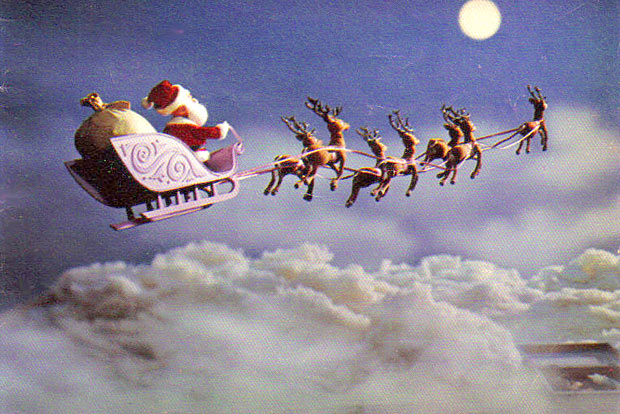 As I type this it is Christmas Eve and I am in Saskatchewan with my family. A thick blanket of snow surrounds the house and the temperature outside is -4 degrees Celsius (“So warm!” my mom says). The tree is lit up, that cats are confused, and the rest of my family is playing Settlers of Catan. A peaceful Christmas scene.

Beneath this peaceful façade runs a current of excitement that has been known to me since childhood. As per family tradition, most of the presents were opened on Christmas Eve, but even in a household of adult children, we know that tomorrow morning means full stockings. And full stockings mean Santa Claus.

Perhaps the tone with which we “thank Santa” for our presents is a little more laughing now and a little less earnest, but Christmas Day still involves some surprises that weren’t there the night before and it’s still fun.

In spite of this, I believe in the idea of Santa Claus, of infusing the dead of winter with a bit of magic and whimsy. I believe children have this right to Santa’s gifts by virtue of their being children. Being a kid is tough–their lives are so often bound by adult rules and restraints they neither caused nor understand.  Despite the books and stories and interesting play spaces that surrounded me growing up, being a kid meant that my imagination was curtailed by adults all the time. No, sticking a bunch of feathers to your clothes won’t make you fly; please don’t jump off anything. No, no one else in your grade one class wishes to hear you sing during Math; please sit quietly. No, there’s no treasure buried in our yard; please don’t dig holes in the lawn. Obviously the adults in my life had to keep me safe, but it was still kind of a downer.

Happily, when it came to Santa Claus my imagination was given free rein. When I discussed my different theories regarding how Santa was going to get in the house (we had a chimney but it led straight to a hot furnace in the basement, which was not ideal), or how he was going to find us at my Grandpa Fred’s that year, no adult dared to contradict me. They may not have believed themselves, but they believed there was something worth preserving in my belief. And that was good enough.

Complaints about rampant consumerism aside (especially if kids have an unrealistic expectation of receiving “things”), why shouldn’t a magic old elf want to bring joy to children once a year? If I was a magical elf I would.

Unfortunately, I am not a magical elf, but I do hope someday to be a parent. And when TC and I are parents I hope that Santa Claus will visit our home and bring to our children the same spirit of wonder and excitement that Santa brought me when I was small. Santa Claus still symbolizes generosity, and the right of children to believe in something good, if they want to. I guess the difference between my own childhood and now is that I now understand the extent to which my participation as a parent will be required. I don’t mind. It will only be for a few years, and when those years are over perhaps I will be wishing that I could still believe in the magic, and not just the symbol.

In any case, have a very Merry Christmas, however you celebrate. xoxo

2 thoughts on “It’s Fun to Believe in Santa Claus”