Stop me if you’ve heard this one: an Irishman, an Englishman, and an American are chained to a wall–

No, this is not the set-up for some lame stereotypical joke, but the premise for Frank McGuinness’ searing play Someone Who’ll Watch Over Me, a story set not against the backdrop of the Lebanon Hostage Crisis, but chained deep within its dark belly. Under the direction of the luminous Julie McIsaac, the players of Dancing Monkey Presents wade neck deep into the waters of fear, despair, madness, and hope that threaten to overwhelm us when we are, quite literally, hostage to forces beyond our control.

Though the play runs over two hours (with a short intermission), McGuinness’ script is witty, biting, and fast-paced, taking its characters careening between the polemic and the playful, the religious and the ridiculous, between anger, insanity, honesty, and love. Though the Lebanon Hostage Crisis and its casualties are, of course, deeply rooted in the political realm, McGuinness’ story does not dwell on this, choosing to focus on the human beings beneath the hostages, in all their fear, self-righteousness, and unexpected kindnesses, rather than on condemning or excusing either the hostage-takers or the governments who may or may not have done all within their power to secure their citizens’ safe release.

McIsaac’s staging of Someone Who’ll Watch Over Me is simple yet effective. Three men are chained in a small bare room, lit by a single dangling bulb. We do not know what time of day it is, or where they are, and neither do they. Against such a sparse backdrop, the performances of Jay Clift (Adam), Ashley O’Connell (Edward), and Kirk Smith (Michael) truly shine as McGuiness’ script races them, and us, through an emotional labyrinth at break-neck speed. Each character is a pressure cooker, roiling with physical energy they cannot expend, anger they cannot unleash, and fear they cannot relieve. The script, which is actually quite funny at times, swings each man from tears to laughter and back again, relentless and unflinching.  The skill that lies beneath the delicately controlled performances delivered by Clift, O’Connell, and Smith is not to be understated.

Though 1980s Lebanon is worlds away for most of us, McGuiness and his characters strip away the layers of distance and time that separate us, the comfortable audience, from them, the men waiting to find out if they will live or die, if will they ever see their families again, or if anyone even knows what has happened to them. In the isolation of a cell, with the possibility of madness an ever-present companion, three men encounter the same fears that gnaw at most of us–that it does not matter where we are from, how educated we are, whether we are good or bad people. Things will happen to us that we do not understand and cannot control. We will not know why. We will not know if there is even a why. What we will know is what our reality is, in the here and now. We will know what the darkness is and we will have to decide how to live with it, no matter how short or long our captivity. In the darkness there is loneliness and helplessness but also humanity.

If I were to have a complaint about the evening it would be that the intimate seating still contained several empty chairs and Someone Who’ll Watch Over Me deserves to play to packed houses. With a ticket price of $16 (affordability being part of Dancing Monkey Presents’ mandate) a script this good, and performances this strong, there is really no excuse not to see it if you can.

Someone Who’ll Watch Over Me plays at Renegade Studios (125 E. 2nd Ave., Vancouver) for one more week, March 18 – 23, at 8:00 p.m. each night. Tickets can be purchased online or at the door (though the house is small so booking early is advised). NB: The vents are turned off during the performance and the space does get a little cold during that time so dress appropriately! 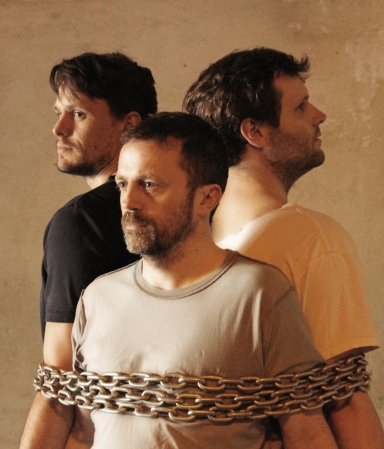 Disclosure: My guest and I were provided tickets courtesy of Dancing Monkey Presents. My content is my own.