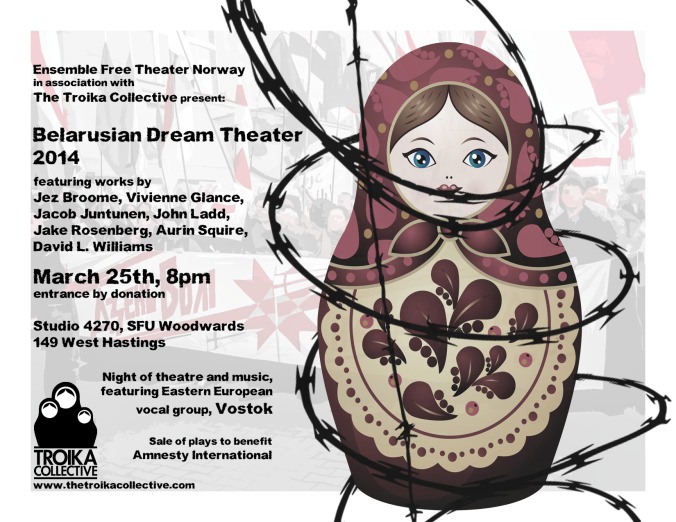 On Tuesday, March 25, The Troika Collective, in association with Ensemble Free Theater Norway (EFTN), will present the Vancouver iteration of the Belarusian Dream Theater project in Studio 4270 at SFU Woodwards.

From the announcement of the project in the Belarusian Review:

[…] The hope is that this coordinated cultural event will stimulate a greater knowledge and interest in Belarus by international audiences, journalists, and artists.

So why is it important to know about what is happening in Belarus? Before becoming involved with this project, I must admit that I had not thought about Belarus in a long time (perhaps not since passing through it on a train when I was ten years old). I have, like many people, been keeping an eye on the political situation in Ukraine. Meanwhile, news from Belarus has been comparatively quiet.

As it turns out, that is because the Belarusian government has, for many years, severely restricted independent expression through a combination of legislation, intimidation, and force. Based on information from Amnesty International, the protests that have rocked Ukraine in recent months would likely not be possible in the political climate of Belarus today, especially given the country’s “Law on Mass Actions”:

In 2011 weekly “silent protests”, where groups of people throughout the country would stroll wordlessly, applaud or use their mobile phone alarms simultaneously, saw participants beaten, sentenced to administrative detention or fined.

The largest demonstration in the country’s recent history, following the presidential elections in December 2010, was suppressed with unprecedented violence. When police moved in to disperse it in the centre of the capital Minsk over 700 people were detained and many, including by-standers, were beaten and wounded. Four prisoners of conscience Mykalau Statkevich, Pavel Sevyarynets, Eduard Lobau and Zmitser Dashkevich remain in prison in connection to the demonstration to this day.

[…] Peaceful protesters are frequently sentenced to fines or short periods of detention for violating the Law on Mass Actions or for minor offenses such as swearing in public. Pavel Vinahradau, a member of the youth political movement Zmena (Change), spent a total of 66 days in detention between 30 December 2011 and 12 December 2012 on eight separate administrative convictions, all for minor offenses such as swearing or violations of the regulations for public meetings and pickets.

And it isn’t only protesters who are finding their freedoms of expression curtailed. Citizens wishing to join or create an independent organization (for support, to express an identity or opinion, etc.) must be sure the organization is registered with the government and meets the government’s strict registration requirements. Activists who have been deemed to be acting on behalf or as part of an unregistered organization face prosecution.

So where does Ensemble Free Theater Norway, the Belarusian Dream Theater playwrights, The Troika Collective, and the rest of the companies participating around the world come in? Well, though many of these plays could not be performed in Belarus (or at least not without considerable risk), they can be performed here in Canada, our actors and directors can speak without fear of reprisal, and we can listen. We invite you to join us for an evening of theatre, music, and hopefully, social good.

The Vancouver performance of the Belarusian Dream Theater project will take place on Belarus’ Freedom Day, March 25, at 8:00 p.m. in Studio 4270, SFU Woodwards. Admission is by donation (though no one will be turned away for lack of funds), with proceeds benefiting the Troika Collective’s operations. If you wish to support free expression in Belarus, proceeds from the sales of the plays being read/performed around the world as part of this project will go to Amnesty International. You can also make a direct donation to Amnesty International online at Amnesty.ca.