Let me tell you a little story. The kind of story that is shared by so many Canadians it has become almost cliché. It is a story of two young people fleeing an Eastern European country (oh, let’s say Latvia) after the Second World War. They meet in England, fall in love, get married. While their first child is still a baby they board a ship bound for Canada. They settle in Toronto and have two more children. They work hard, save their money, pay taxes. They are proud of their heritage and participate in the sizable Latvian community in Toronto, but they are also proud to live in Canada and love their new home. All three children attend Canadian universities.

The first child, the one who was born in England, eventually moves to the Prairies, falls in love, gets married, and has kids.

And that is where I, and bill C-24 (the “Strengthen Canadian Citizenship Act”) come in. You see, because my mother was born in England, she, and her children, are eligible for British citizenship. Though I have been a dual citizen of both Canada and Great Britain since I was 15, I have always felt, first and foremost, that I am a Canadian. There is no other country on this planet that I would rather be a citizen of. It’s not that I think my country is the greatest nation on earth, or that the sun never sets on our gloriousness, or any other alarmingly patriotic claptrap. It’s that Canada is my home. There will never be another.

I know that my story, and my sentiments, are shared by many Canadians. A lot of us have parents who were born outside the country. The story of Canada as a safe haven and a land of opportunity for those fleeing persecution or war is as feel-good and heart-warming as its tale of the intrepid pioneers, carving out a life in Canada’s west, or its stout-hearted Maritimers, holding fast to their rocky shores and pulling their living out of the sea. It is, of course, excellent PR, a way to court both foreign investment and the immigrant vote (“Canada the Benevolent Multicultural Mosaic, now with Medicare!”).  Though these tales are always incredibly oversimplified (First Nations people, for example, are conspicuously absent in these feel-good narratives, as are other inconvenient “bumps” in the story, such as the Chinese head tax, Japanese-Canadian internment during the Second World War, and Ukrainian-Canadian internment during the First), the gist is that Canada loves its immigrants, wouldn’t be what it is today without them, celebrates their various cultural heritages, and is grateful for their contribution to the country.

Or so I thought. 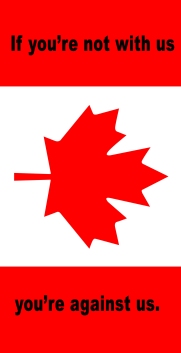 First introduced in Parliament in February of this year (and not yet passed by the House of Commons), several aspects of bill C-24 are giving the Canadian Association of Refugee Lawyers pause, and are leaving me feeling anxious, insulted, and second-class. If this bill passes into law, Canadian citizenship will be harder to obtain, but also, shockingly, easier to lose.

Never, in my entire life, did it occur to me that a Canadian born in Canada could lose their right to be a Canadian. The thought makes me sick to my stomach. It’s just…wrong. It exposes some, but not all, Canadians to an additional punishment if convicted of the crimes outlined in the bill: banishment. Not only is banishment as a punishment antiquated and out of line with a modern justice system, it’s only a punishment for SOME people, i.e. people who were, are, or could be dual citizens.

According to a statement prepared by the Canadian Association of Refugee Lawyers:

The new law will make it easier for the government to take away your citizenship in the following ways:

1. For all naturalized citizens, a federal government official can revoke your citizenship if he believes you never intended to live in Canada. This could happen if you decide to study in, accept a job in, or reside in another country. In contrast, Canadian citizens born in Canada cannot lose their citizenship by living outside of Canada.

3. The power to remove your citizenship will be given to an official of Citizenship and Immigration Canada. The decision may be made in writing with no opportunity for you to speak to the official. Under the current law [i.e. as it stands now, prior to the passing of C-24], to take away your citizenship, the government must make an application to a Federal Court judge where you will have an oral hearing to defend your right to citizenship.

This bill is just wrong, and cannot logically exist in a fair justice system. Let’s say both Joe Anglophone and I are convicted of espionage (I have no idea why or how I could ever be convicted of espionage but it’s an example). Joe Anglophone’s family settled in Ontario in the 1800s and any connections he may have to Mother Britain are so many generations back that he could not possibility apply for dual citizenship. I, of course, have a mother who was born in England and even if I hadn’t applied for British citizenship I would still have the potential. Under current law, both of us would receive the same sentence for the same crime (whatever the sentence for a conviction of espionage is, which I must say I do not know). Under bill C-24, Joe Anglophone would still receive the standard sentence for espionage, while I, as a person who has the potential for dual citizenship, would receive my espionage sentence AND be stripped of my right to be a Canadian. Joe Anglophone’s crime could even have been worse than mine, but as a dual-citizen only I would face banishment.

I think I have outlined pretty thoroughly how bill C-24 is an insult to me and people like me (since that is the situation that is most immediate to me), but it’s not too hard to see how bill C-24 is also an incredible insult to many other people who call this country home.

Okay. So the bill insults naturalized citizens, dual citizens, First Nations people, and is biased to privilege Canadians of Anglophone and Francophone ancestry. But what about those Canadians like Joe Anglophone, who will, under C-24, have more rights to their citizenship than I will? Does C-24 insult them too, or does it, as its short title would like to suggest, “strengthen” Canadian citizenship for these people?

I’d like to think that even citizens whose Canadian status is not threatened by this bill would still feel that being Canadian means more than divisive politics. Because it means so much more to me, and that’s why I wrote to my MP to urge her to oppose bill C-24. I encourage you to do the same.