When I was offered the opportunity to attend Sal Capone: the Lamentable Tragedy of (presented by urban ink productions in cooperation with Black Theatre Workshop) I had no idea what to expect. I know nearly nothing about hip hop, and had no idea how it would play in a theatrical production. I thought, this will either be an incredible experience or a dud. I had never heard of Fredy Villaneuva, the unarmed youth whose fatal shooting by Montreal police inspired this play. Many new plays have called themselves tragedies, but very few have had the balls to honestly examine the complexities that create them.

It was my good fortune to discover that Omari Newton’s Sal Capone is a tragedy in the true Shakespearean sense of the word. As in Macbeth or Hamlet, one act of violence leads to others–violent emotions, violent words, violent actions. We know where this is going but the powerful emotional responses that bring us there are so skillfully wound up that we cannot look away. In this tragedy, the protagonists are not kings or princes but disenfranchised young people full of potential and talent. Their “fatal flaw” is not ambition or indecision but their anger at a system that marks them as dangerous, dehumanizing rather than protecting them. 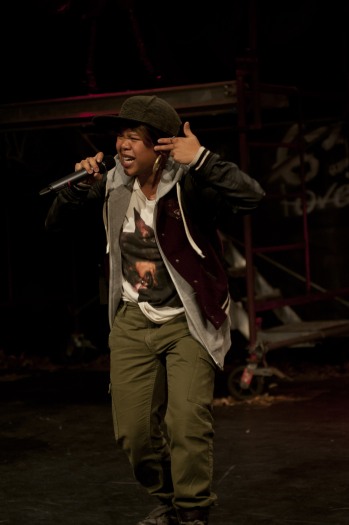 I know I am watching a compelling piece of theatre when I cannot see the line between where the script ends and the performance begins. Tristan D. Lalla, Kim Villagante, and Jordan Waunch did exactly what excellent actors should do, inhabiting their characters (members of a hip hop group called “Sal Capone”) so completely that I never saw them working, only being. The hip hop pieces in the show are unforced, unpretentious, and incredibly powerful. I may not know much about hip hop, but I know when a performer is truly connected to what their character is doing, and these actors (who are also hip hop artists) are nothing if not genuine. I believed it. I bought it. I sent my heart out to it.

Counterintuitively, a cross-dressing sex worker narrator (played by Billy Merasty) frequently breaks the fourth wall and a little sister character (Letitia Brooks) also seems to play directly to the audience with her amusing grammatical pedantry. I personally found this contrary to the authenticity Lalla, Villagante, and Waunch create (which is not to say that there were problems with Merasty and Brooks’ performances, only that they operate, it seems, on a different level of theatricality). That said, when Merasty and Brooks enter the action not as a guides or foils but simply as people caught in the crosshairs, the “actor” masks fall away and you see every character for what they are, motivated by fear and anger, prey to a violence they participate in but cannot control. What I’m saying is that there will be times in this play when you are taken out of the honesty of the moment, into a place a little more literary, a little more theatrical, but when shit hits the fan the moment becomes real and every single performer is in it, body and soul. Sal Capone transports you into a place you’ve been busy ignoring, a place where violence isn’t just something that happens to people in gangs (as one of the characters points out, “What does ‘known to police’ even mean?”). A place where we realize that we, as a society, need to do better.

One of Newton’s greatest achievements in his script is his ability to examine violence and culture without resorting to a dichotomy of black and white, hip hop=good, police=bad. The “enemy” of the story (i.e. the police) are never even present onstage but between Newton’s sympathetic characters there is still enough fear and violence to spur the plot towards its tragic conclusion. Marginalized and misunderstood, Sal Cappone‘s characters trade in words of hate, hurting one another with “chink” and “faggot”, understanding that words are weapons, often the only weapons they have, and the only outlet for the violence they feel, fending off the physical violence that threatens to emerge.

The lesson in this tragedy, as in so many great tragedies, is that violence begets violence. People must be given a chance to break the cycle. We need to talk to one another, and do better. Sal Capone: the Lamentable Tragedy of is an incredible achievement and a powerful addition to this necessary conversation.

Sal Capone: the Lamentable Tragedy of plays at the Roundhouse Theatre until May 31. Tickets can be purchased online through urban ink production’s website.

Disclosure: I attended Sal Capone: the Lamentable Tragedy of courtesy of urban ink productions. The content of this review is my own.

One thought on “Sal Capone: a tragedy with sincerity and depth”